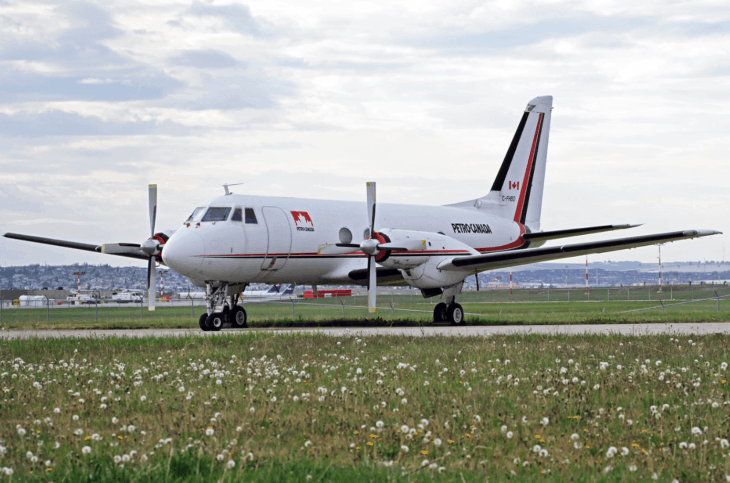 Gulfstream I Production and Development

The Grumman Aerospace made a study to produce an executive aircraft derived from the Grumman TF-1. This had been in consideration in aim to replace the hundreds of old piston twin-engine aircraft that were used during missions. The company distinguished that newly created aircraft needs to have a turboprop engine, and the old-tech Rolls-Royce Dart was selected.

On August 14 1958, the Gulfstream I made its first flight from Bethpage, New York with its N701G aircraft registry.

On May 2 1959, the aircraft received its type certification from the Federal Aviation Administration (FAA). In June 1959, deliveries of production aircraft followed.

In 1969, production of the Gulfstream I has ended with 191 aircraft built.

In 1979, design rights of Grumman were acquired by Gulfstream Aerospace Corporation, proposing them the G159C, a stretched regional version. In October 1979, the version took its first flight. In November 1980, production has ended with five aircraft types built.

The Gulfstream I is the introductory aircraft in the line of Gulfstream that started the basic fuselage cross-section that passes up to the recent Gulfstream IV and V. It has an external length of 19.48 meters and height of 6.98 meters. The fuselage structure is made of semi-monocoque aluminum alloy.

It is a low-wing cantilever monoplane with a wingspan of 23.96 meters and wing area of 56.70 square meters. It has a retractable tricycle landing gear that provides better ground visibility and permits application of full brake.

The aircraft cabin has a length of 9.91 meters, height of 1.86 meters and width of 2.23 meters. It can carry up to twenty-four passengers in a high-density configuration and eight passengers in an executive set up.

The Gulfstream I has a hydraulically operated airstair for boarding and deboarding of the passengers that was located in the forward cabin for entrance and exit.

Gulfstream I Engine and Performance

Two Rolls-Royce Dart turboprop engines power the Gulfstream I with a maximum thrust of 2,185 horsepower each. It has four-blade, constant speed, full-feathering propellers from Rotol Limited, an engineering company in the United Kingdom.

The Gulfstream I has a take off distance of 1,508 meters and 1,066 meters for its landing.

The G-159 is an executive jet that can seat up to fourteen passengers. Two hundred of this type were produced.

The G-159C is a lengthened regional variant that can carry up to thirty-seven passengers.

The VC-4A is a transport aircraft built for the United State Coast Guard. Only one of this type was produced.

The TC-4B is a US military aircraft designation used for navigation training and transport operations by the United States Navy.

The TC-4C Academe is a US military aircraft designation used by the United States Navy and Marine Corps for navigation training that took its maiden flight in 1967. Nine of this type were built.