The Gulfstream II is a twin turbofan powered business jet has a capable of flying on transcontinental range. Manufactured by Grumman Aerospace Corporation later Gulfstream Aerospace from 1967 to 1980, this business aircraft has a maximum range of 3580 nautical miles and a maximum cruise speed of 420 knots. 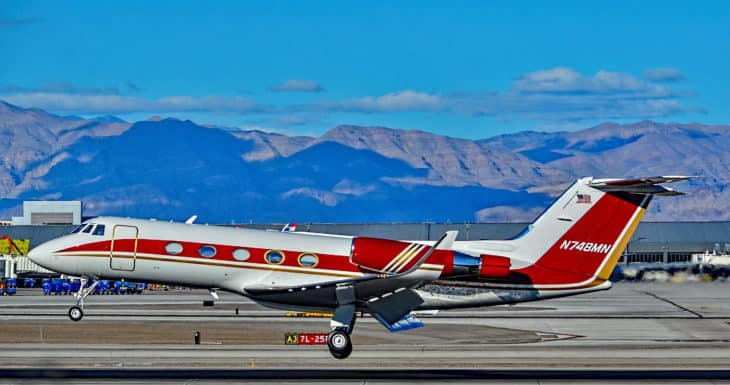 On May 5 1965, the Gulfstream II got a go-ahead for production by Grumman Aerospace with thirty firm orders.

On October 2 1966, the Gulfstream II took its 52-minute maiden flight.

On October 19 1967, the aircraft received its type certification from the Federal Aviation Administration. It was authorized to meet the requirements of public transportation; however, it wasn’t considered cost-effective to operate as an airliner. The Gulfstream II were manufactured as green aircraft, a brand new aircraft from the factory with an incomplete interior and were deployed to a completion center to suit the specialized interior and avionics as what the customers required.

In March 1976, tip tanks were certified in order to expand the range of the Gulfstream II.

In 1979, aircraft production has ended. There were forty-three aircraft transformed into Gulfstream IIB from 1981 to 1987.

240 out of 256 Gulfstream IIs produced are still in service.

The Gulfstream II is equipped to fly at a high speed and has a long range capacity without compromising aerodynamic performance.

It has a swept wing with a span of 20.76 meters and a wing area of 75.21 square meters. The initial design of the wing was impacted by consideration of low speed and cruise. The position of the aft-mounted engine was determined after considerable study and repetition of design taking into consideration the standards of structure, aerodynamic and ground clearance. The leading edge radius was customized to prevent detachment of the leading edge. There is also a single-slotted fowler flap of 30% chord that slides backward.

The winglets of the aircraft were supplied by the Aviation Partners Inc., a private corporation that focuses in performance-enhancing winglet system in Seattle.

The Gulfstream II has an external length of 24.11 meters and height of 7.50 meters. It has a cabin dimension of 10.33 meters x 2.23 meters x 1.86 (length, width, height). The aircraft cabin of the Gulfstream II stays as one of the largest cabins in the long-range business class, despite the newer types.

The aircraft is powered by two Rolls-Royce Spey turbofan engines with a maximum thrust of 11,400 lbf each. With a range of 3,580 nautical miles and maximum cruise speed of 420 knots, it is capable of flying on transatlantic routes. It can fly up to 4500 feet and has a climb rate of 4,350 feet per minute. Its take off distance is 1,738 meters and 1,346 meters for landing.