The Grumman F6F Hellcat was manufactured by Grumman as a carrier-based fighter aircraft during the Second World War. It was developed to take over the preceding F4F Wildcat and to oppose the Mitsubishi A6M Zero long-range fighter aircraft. The F6F was the superior fighter of the United States Navy during the latter half of the Pacific War, defeating the Vought F4U Corsair that had issues with carrier landings. 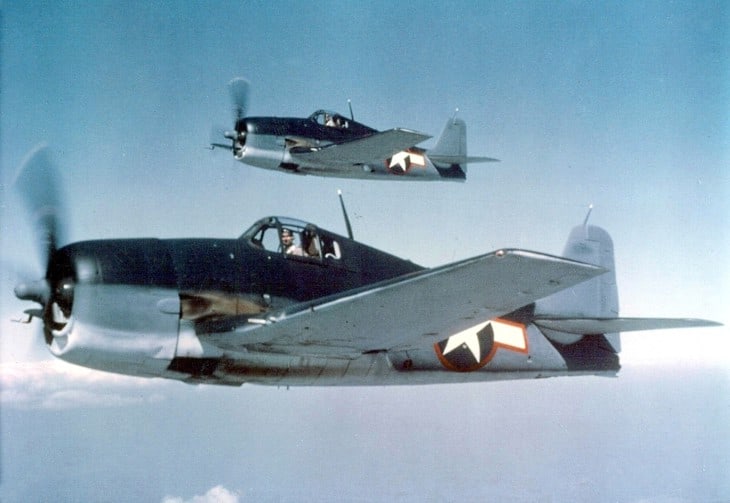 The aircraft is powered by a single Pratt and Whitney R-2800-10W Double Wasp engine. It is an eighteen-cylinder, air-cooled, twin-row radial engine with water injection, two poppet valves per cylinder, variable-speed single-stage single-speed centrifugal-type supercharger, Stromberg injection carburetor fuel system, and an air-cooling system. It produces a maximum thrust of 2,200 hp and drives a three-bladed Hamilton Standard constant-speed propeller.
The maximum speed of the F6F Hellcat is 340 knots while the stall speed is 73 knots. It has a combat range of 821 nautical miles and a ferry range of 1,330 nautical miles. The service ceiling is 37,300 feet and the rate of climb is 2,600 feet per minute. It has a takeoff distance of 475 meters and a landing distance of 570 meters.

The fighter aircraft could be loaded with several armaments. It included six 12.7 mm M2 Browning machine guns with 400 rounds per gun or two 20 mm AN/M2 cannon with 225 rounds per gun and four 12.7 mm Browning machine guns with 400 rounds per gun. It was also equipped with six 127 mm High-velocity aircraft rockets or two 298 mm Tiny Tim air-to-ground rockets, up to 1,800 kg full load of bombs or torpedoes such as a 910 kg bomb or an Mk.13-3 torpedo, and some underwing bombs.