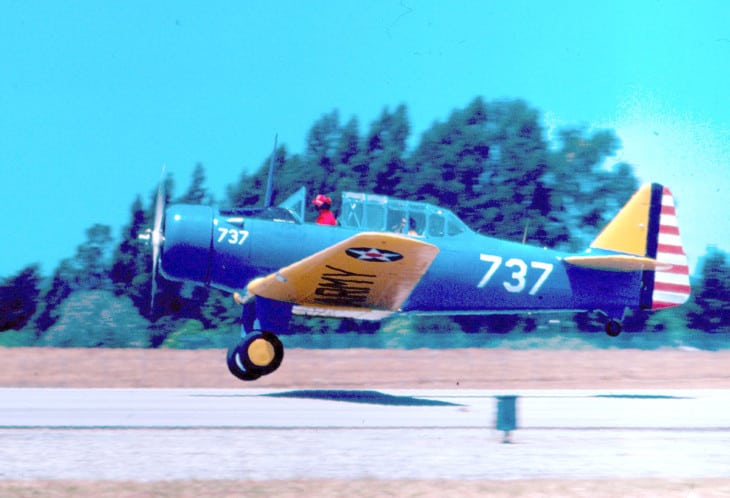 The North American BT-14 is a two-seat primary training monoplane with a lengthened fuselage of welded chrome-molybdenum steel-tube framework. The fuselage is fabric-covered and has an external length of 8.7 meters, an external height of 2.7 meters, and a fuselage diameter of 1.1 meters.

The cantilever tail and fin were made of metal and covered in sheets and the rudder and elevators were of light-alloy frames covered in fabric. The tail height is 4.1 meters. It has a low wing with a wingspan of 13.1 meters and a wing area of 23 square meters.

The wing has five sections such as a center-section of parallel cord and thickness, two outer sections with back-swept leading edge and straight trailing edge, and wingtips.

It has a single-spar structure that carries most of the forces with spaced ribs and was covered with stressed aluminum-alloy skin. The ailerons have aluminum-alloy frames and were fabric-covered. The aircraft has divided undercarriage with two cantilever oleo struts, hydraulically-operated, wheel brakes, and an oleo-sprung steerable tail wheel. It has a wheelbase of 5.9 meters.

The engine produces a maximum thrust of 420 horsepower at 14,000 feet. The aircraft has two welded aluminum-alloy fuel tanks with a normal fuel capacity of 104 US gal, while the oil tank in the engine compartment can carry 9.5 US gal. The aircraft has a maximum speed of 150 knots at 1,500 feet and a cruise speed of 130 knots. The landing speed is 57 knots. It has a travel range of 762 nautical miles and a service ceiling of 21,650 feet. The aircraft can climb at a rate of 1,100 feet per minute.

The aircraft has a maximum takeoff and landing weights od 2,065 kg and 2,030 kg, respectively.