The North American F-107 was designed by North American Aviation as an entry in a design competition for a tactical fighter bomber by the United States Air Force in the 1950s. The aircraft was derived from the F-100 Super Sabre supersonic jet fighter and incorporated several upgraded design features, in particular the air intakes over the fuselage. Only 3 were built. 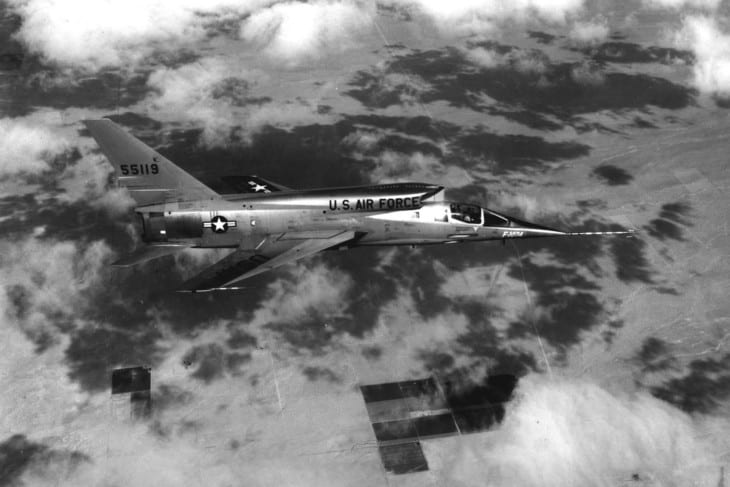 The aircraft is fitted with a single Pratt and Whitney YJ75-P-9 turbojet engine. It has a two-spool eight-stage LP and seven-stage HP axial compressor, cannular combustors with eight burner cans in an annular combustion chamber, two-spool one-stage HP and two-stage LP axial turbine, and a return pressure spray system. The engine is rated at 24,500 lbf thrust. The F-107 has a maximum speed of 1,125 knots or Mach 2. It has a travel range of 2,109 nautical miles. The aircraft was designed to fly up to 53,200 feet and to climb at a rate of 39,900 feet per minute.

The F-107 fighter-bomber was armed with four 20 mm Pontiac M39 single-barreled revolver cannon or a single 20 mm six-barrel M61 Vulcan autocannon. It was also loaded with 4,500 kg of bombs on five hardpoints; two under each wing, and one semi-recessed ordnance station under the fuselage centerline, and a wide variety of ordnance such as tactical nuclear weapons.