The North American FJ-3 Fury is a carrier-capable fighter aircraft designed and manufactured by North American Aviation. It took its first flight in July 1953 and served in the United States Navy and United States Marine Corps. The aircraft was introduced in 1954 and was retired in September 1962. It is now phased out of service with a total number of 538 aircraft built. It was developed from the F-86 Sabre transonic jet fighter. 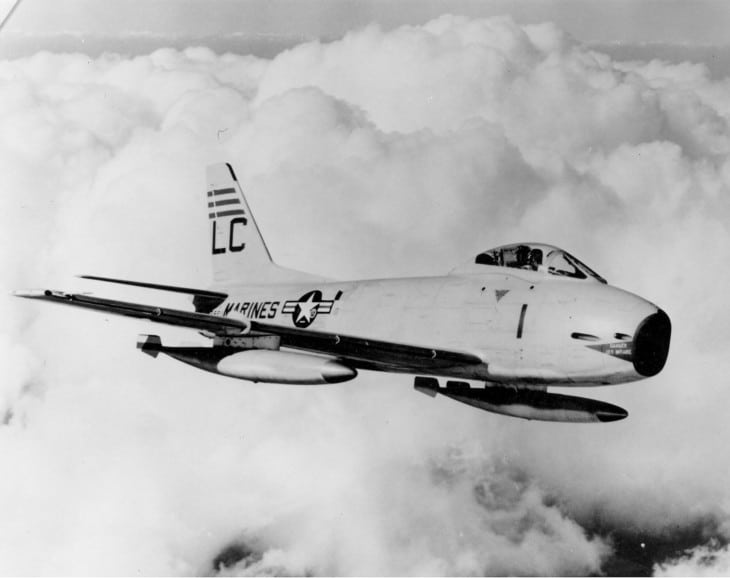 Despite the ongoing development of the FJ-2 fighter, the development of a version fitted with Wright J65 was also presented. The aircraft was designated as FJ-3 and in March 1952, a total of 389 FJ-3s were ordered. On July 3, 1953, the first production aircraft conducted its maiden flight.

FJ-3s that were built earlier featured the similar wing of the FJ-2, however, later models from 1955 onwards were fitted with a so-called 6-3 wing, and a stretched leading edge. The aircraft also featured better maneuverability at a cost of a little increase in landing speed because of the removal of the leading edge slats.

The leading edges of the aircraft were designed to hold additional fuel. The FJ-3s built later on were fitted with four stations for external loads up to 453 kg and 226 kg on the inboard and outboard stations, respectively. In September 1954, aircraft deliveries started.

It was first received by the Navy Squadron VF-173 at Jacksonville, Florida. In May 1955, the FJ-3 accomplished its first carrier landing on the USS Bennington, and in June 1956, the aircraft piloted by Cdr. Ralph L. Werner from VF-21 became the first aircraft who landed on the new USS Forrestal.

The aircraft faced issues on the J65 engine such as lubrication system failures upon the speeding up of launch or while maneuvering, as well as problems with the turbine blades. Even so, the United States Navy found satisfaction on the FJ-3 compared with the earlier FJ-2.

In March 1954, the Navy made an order for 149 more aircraft. 538 FJ-3s were built in total and 194 were converted to FJ-3Ms that could be armed with AIM-9 Sidewinder short-range air-to-air missiles. In 1956, all the FJ-3s of the United States Navy were retrofitted with a probe-and-drogue air-to-air refueling system.