The North American F-100 Super Saber was designed by North American Aviation as a supersonic jet fighter aircraft developed from F-86 Sabre air superiority fighter. Introduced in September 1954, the F-100 was in service from 1954 to 1971 with the United States Air Force and until 1979 with the Air National Guard. The F-100 is the first of the Century Series of United States fighter aircraft and the first United States Air Force fighter that can obtain supersonic speed in steady flight. 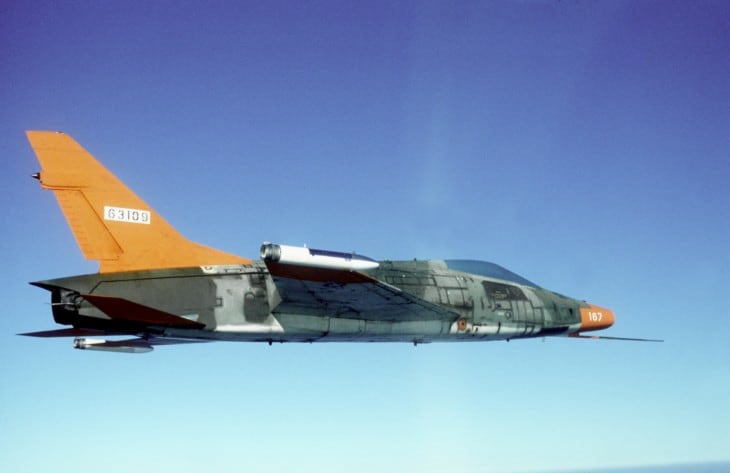 The North American F-100 was built in different variants. On January 24, 1956, the F-100D took to the sky for the first time. It is a single-seat fighter bomber fitted with upgraded avionics, enlarged wing, and vertical stabilizer and landing flaps.

The F-100D is powered by a single Pratt and Whitney J57-P-21/21A afterburning turbojet engine. It is an axial-flow turbojet with an all-axial nine-stage LP and seven-stage HP compressor, cannular combustors, and an all-axial single-stage HP two-stage LP turbine. It produces a maximum dry thrust of 10,200 lbf and an afterburning thrust of 16,000 lbf. The aircraft has a maximum speed of 803 knots and a cruise speed of 512 knots. It has a travel range of 1,734 nautical miles. The service ceiling is 50,000 feet and the climb rate is 22,400 feet per minute.

The aircraft can be armed with four 20 mm Pontiac M39A1 single-barreled revolver cannon with 200 rounds per gun, six hardpoints with a capacity of 3,190 kg with provisions to carry combinations of four AIM-9 Sidewinder or two AGM-12 Bullpup or two/four LAU-3/A unguided rocket dispenser, and conventional bombs or other nuclear bombs. The upgraded avionics include a Minneapolis-Honeywell MB-3 automatic pilot to enable the pilot to work using both hands while reading maps or loading weapons, AN/AJB-1B low-altitude bombing system, and AN/APR-26 rearward radar warning system.