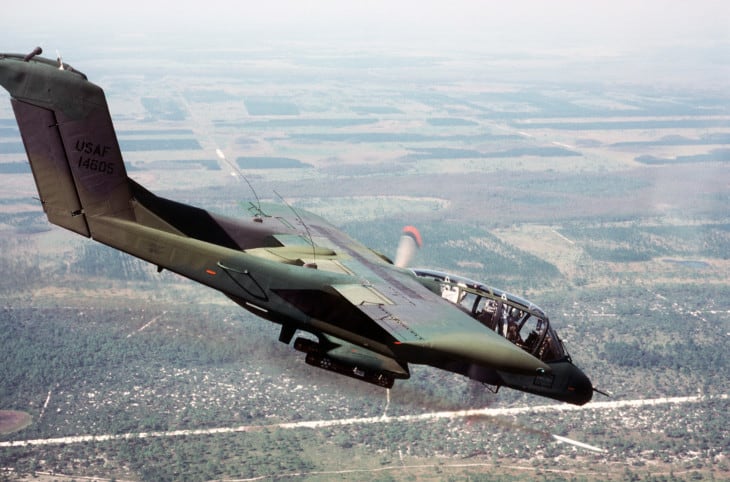 The OV-10D version is a second-generation Bronco built under the Night Observation Gunship System program. This version was a much improved OV-10A airframe, incorporating a forward-looking infrared night vision system.

It was also fitted with larger engines and bigger propellers made of fiberglass. Seventeen OV-10D were converted from OV-10A. It has an external length of 13.41 meters, an external height of 2.5 meters, and a fuselage width of 1.2 meters.

The OV-10D is powered by two Garrett T76-G-420/421 turboprop engines. Each engine is rated at 1,040 shaft horsepower thrust and drives three-bladed Hamilton Standard constant-speed fully feathering propellers. The aircraft has a maximum speed of 250 knots at sea level.

The landing run at MTOW is 38 meters. The aircraft could be loaded with a single 20 mm M197 electric cannon or four M60C machine guns and seven hard points; five on the fuselage and two underwing with provisions to carry combinations of 7- or 19-tube launchers for 2.75 in Folding Fin Aerial Rockets/2.75 in WAFARs or 2- or 4-tube launchers for 5 in FFARs or WAFARs, AIM-9 Sidewinder missiles on wings, and up to 227 kg of bombs.