The North American B-25 Mitchell was introduced in 1941 and named after the late Major General William “Billy” Mitchell, the father of the United States Air Force. The aircraft was in service with different Allied air forces during the Second World War, and many still remained in service after the war and operated over forty years. It was manufactured by North American Aviation and first flew in August 1940. 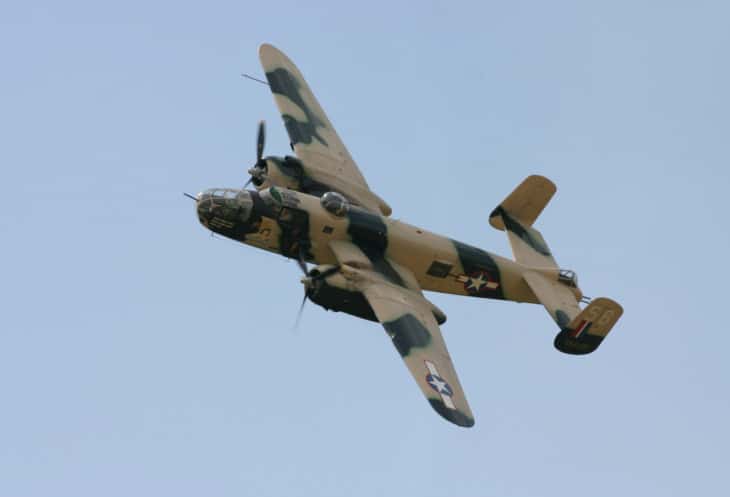 Blog posts that mention the North American B-25 Mitchell:

The B-25 Mitchell was developed and manufactured by North American Aviation Inc. as a response to a prewar requirement by the Air Corps for a medium bomber that could carry a 1,100 kg of payload over 1,042 nautical miles at 260 knots. The resulting aircraft was a high-wing monoplane with twin tail configuration, tricycle undercarriage, and was fitted with twin Wright radial engines.

The B-25 was first flown on August 19, 1940. It was introduced in 1941 and was in service with the United States Army Air Force, United States Marine Corps, Royal Air Force, and Soviet Air Force. It was retired in 1979 after four decades of service. The B-25 was developed from the NA-40 and a total of almost ten thousand aircraft were built.

The B-25 was produced in many versions; the B-25H is an updated variant of the B-25G with a repositioned manned dorsal turret toward the forward fuselage. It can carry five crew members including a pilot, navigator/bombardier/ turret gunner/engineer, radio operator/waist gunner, and tail gunner.