The North American F-82 Twin Mustang was manufactured by North American Aviation and is the final American fighter powered by a piston that was ordered into production by the United States Air Force. Introduced in 1946, the F-82 was developed from the long-range P-51 Mustang. The aircraft took its first flight in 1945 and was retired in 1953 with a total of 272 F-82s built. 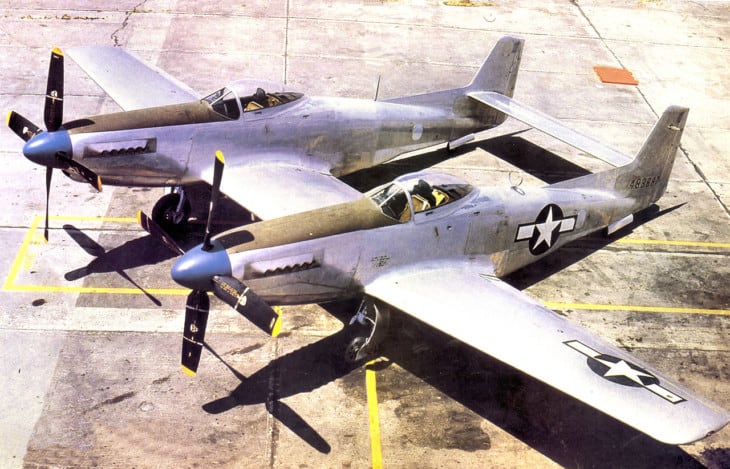 The North American F-82 was originally planned to become a very long-range (VLR) escort fighter and was built to escort the four-engine Boeing B-29 Superfortress heavy bomber during the Second World War. The F82 Twin Mustang was built in different versions. The F-82G is a night fighter version. It was designed with a nacelle below the center-wing that lodged SCR-720C18 radar equipment. It was also equipped with an automatic pilot and a radar operator that would replace the co-pilot. In September 1948, the type entered into operational service. One aircraft was accepted in February while the rest were accepted in the fiscal year 1949. In March 1949, the final F-82G was received.

The aircraft is powered by a single V-12 liquid-cooled Allison V-1710-143 piston engine that produces a 2,250 horsepower in War emergency rating and was fitted to port, or a single Allison V-1710-145 fitted to starboard. The engine drives a four-bladed Aeroproducts A-542F-D1 constant-speed fully-feathering propellers. The F-82G has a maximum speed of 401 knots at 21,000 feet and a cruise speed of 249 knots. The travel range is 1,950 nautical miles. It can fly up to 38,900 feet and can climb at a rate of 3,770 feet per minute. The aircraft could be loaded with six .50 caliber M3 Browning heavy machine guns, twenty-five 127 mm rockets, and four 454 kg of bombs.