The North American NA-16 was the first trainer developed and produced by North American Aviation and pioneered the line of trainer aircraft of the manufacturing company. In April 1935, the aircraft first flew and served in the United States Army Air Corps, as well as the Royal Austrian Air Force, Swedish Air Force, and French Air Force. 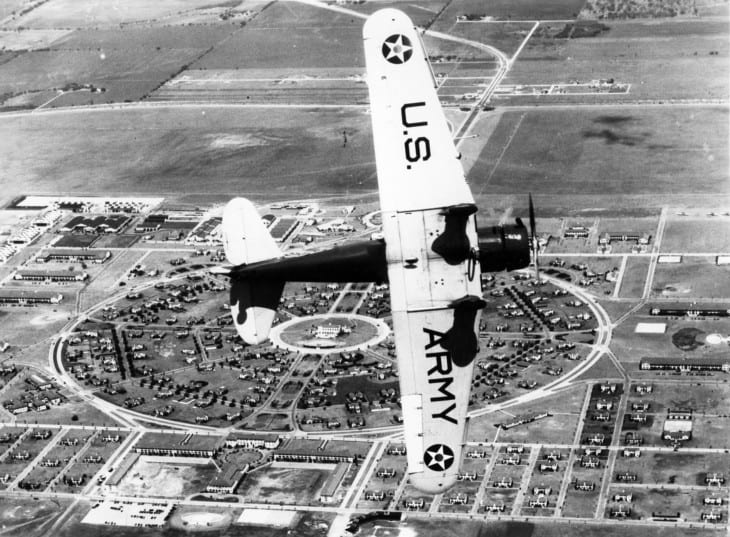 On December 10, 1934, the NA-16 specification was designed by James Howard Dutch Kindelberger, John L. Lee Atwood, and H.R. Raynor of the North American Aviation. A primary feature was an enclosed canopy. On April 1, 1935, the NA-16 operated by Eddie Allen took to the air for the first time. On May 27, 1935, an enclosed version of the cockpit was presented to the United States Army Air Corps for performance testing as a basic trainer. The NA-16 was produced from 1935 to 1939 with a total number of 1,935 aircraft built.

The NA-16 has an external length of  8.41 meters, an external height of 2.85 meters, and a fuselage diameter of 1.2 meters. The original fuselage was fabric-covered and of steel tubes, before later models featured aluminum monocoque construction.

The aircraft is a low-wing monoplane with a tandem configuration. Aircraft versions vary from having an open cockpit to being glass-covered. It has a wingspan of 13 meters, a tail height of 3.58 meters, and a wheelbase of 5.7 meters. The empty weight is 1,396 kg and the maximum takeoff weight is 2,300 kg. It has a maximum payload of 200 kg and a fuel tank capacity of 100 US gal.

The aircraft could be powered by different air-cooled radial engines such as the Wright Whirlwind, Pratt and Whitney Wasp, and Pratt and Whitney Wasp Junior with different horsepowers depending on the need of the customer. The Wright R-975 Whirlwind is a nine-cylinder supercharged air-cooled radial piston engine rated at 400 horsepower thrust and drives a two-bladed Hamilton standard propeller. It has two valves per cylinder, pushrod-actuated, gear-driven supercharger, and direct drive reduction gear.