The North American T-28 Trojan was developed by North American Aviation as a piston-engine military trainer aircraft that first flew in September 1949. It was in service with the United States Air Force and United States Navy since the 1950s. Aside from being a trainer, the T-28 Trojan also served as a counter-insurgency aircraft mainly during the Vietnam War. It carried on its use in the civilian market as an aerobatic and warbird aircraft. 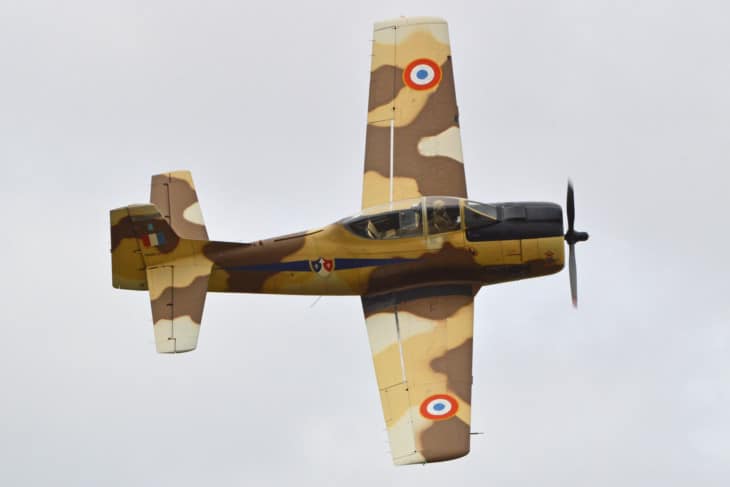 On September 24, 1949, the prototype XT-28 took its maiden flight. It was built as a replacement on the T-6 Texan single-engined trainer. In mid-June 1950, the United States Air Force version T-28A went to the Air Proving Ground at Eglin Air Force Base, Florida to perform suitability tests.

The aircraft was produced from 1950 to 1957 with a total number of 1,948 built. In 1962, the T-28Bs were modified for the United States Air Force for roles such as counter-insurgency, forward air controller, reconnaissance, and search and rescue in Vietnam. The converted aircraft were designated as T-28Ds.

The T-28D version is powered by a single Wright R-1820 Cyclone engine. It is a nine-cylinder, single-row, supercharged, air-cooled radial engine rated at 1,425 horsepower thrust. It has two overhead valves per cylinder with a sodium-filled exhaust valve, a single-speed centrifugal supercharger, a Stromberg downdraft carburetor with an automatic mixture control fuel system, a dry sump with one pressure and one scavenging pump, and an air cooling system. The Th-28D has a maximum speed of 298 knots at 10,000 feet and a ferry range of 920 nautical miles. It can fly up to 35,500 feet and can climb at a rate of 3,540 feet per minute. The aircraft could also be loaded with six hardpoints with a total capacity of 540 kg.