The North American P-51 Mustang was designed by the North American Aviation design team led by James Kindelberger in April 1940. It is a long-range single-seat fighter and fighter bomber in service during the Second World War and the Korean War. 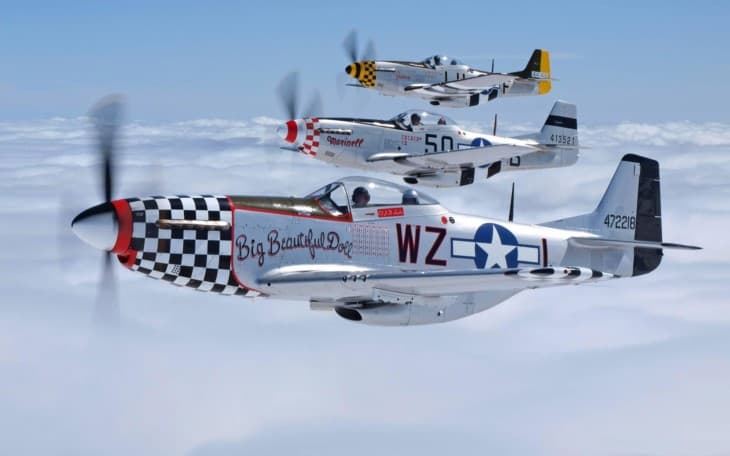 In April 1940, the Mustang was developed by the North American Aviation design group led by James Kindelberger as a response to a need from the British Purchasing Commission to build Curtiss P-40 fighters under license. Instead of building an aged design, the manufacturing company proposed a modern fighter. The resulting aircraft was a trim low-wing monoplane fitted with an Allison piston engine. On September 9, 1940, the prototype designated as NA-73X was rolled out and on October 26, 1940, it made its first flight.

The P-51D is powered by a single Packard V-1650-7 Merlin engine, a version of the Rolls-Royce produced under license by the Packard Motor Car Company. It is a twelve-cylinder liquid-cooled piston with two intakes and two exhaust valves per cylinder, a two-speed two-stage supercharger, twin-choke updraft carburetor with automatic mixture control, dry sump oil system, and seventy percent water and thirty percent ethylene glycol cooling system. The engine produces a maximum thrust of 1,490 horsepower at 3,000 rpm and 1,720 horsepower at war emergency power (WEP) and drives a four-bladed constant-speed variable-pitch Hamilton Standard propeller.