The North American B-45 Tornado was designed and produced by North American Aviation as a jet-powered bomber during the early years. It was known as the first operational jet bomber that served the United States Air Force, and the first multi-engine jet bomber to be refueled in midair. 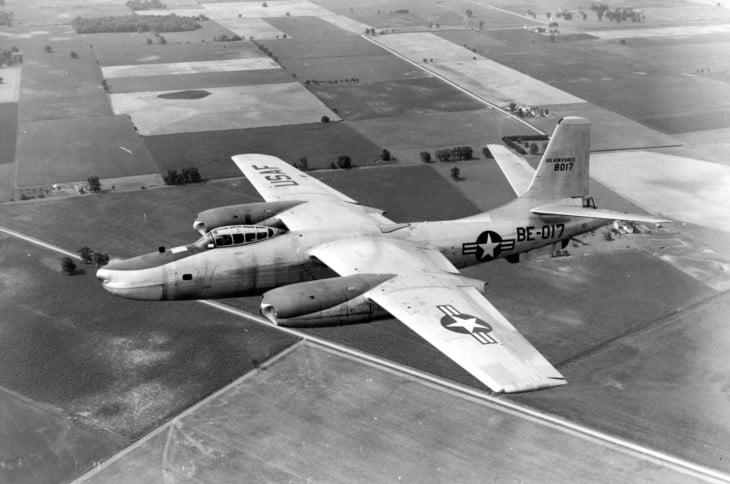 On February 24, 1947, the prototype XB-45 took its maiden flight from Muroc Army Air Field. 131 test flights in total were performed by three XB-45s; one was destroyed afterward and the other two were accepted by the United States Air Force on July 30 and August 31, 1948, respectively.

Compared to the XB-54, the B-45A version had upgraded ejector seats and improved communication equipment. It is fitted with a USAF autopilot Type E-4 also known as the Sperry A-12 Gyrosin Automatic Pilot System, and bombing navigation radar. In February 1948, the first production aircraft took to the air for the first time. In April of the same year, twenty-two B-45s were delivered to USAF.

The multi-engine aircraft is powered by four General Electric J47-GE-13 turbojet engines. It has a twelve-stage axial compressor, a single-stage axial turbine, and a pressure feed spray with a scavenge oil system. The engine produces a maximum takeoff thrust of 5,200 lbf each. The B-45 has a maximum speed of 492 knots and a cruise speed of 317 knots. The standard range is 1,036 nautical miles and the ferry range is 1,890 nautical miles. It can fly up to 46,000 feet and can climb at a rate of 5,200 feet per minute. The aircraft can be loaded with two 13 mm M3 heavy machine guns and up to 10,000 kg of bombs.