The North American FJ-1 Fury was developed and manufactured by North American Aviation and was the first operational jet aircraft that served the United States Navy. Introduced in October 1947, the FJ-1 was developed from the P-51D Mustang long-range fighter bomber. It performed its maiden flight in September 1946 and a total number of 33 aircraft were built including prototypes. 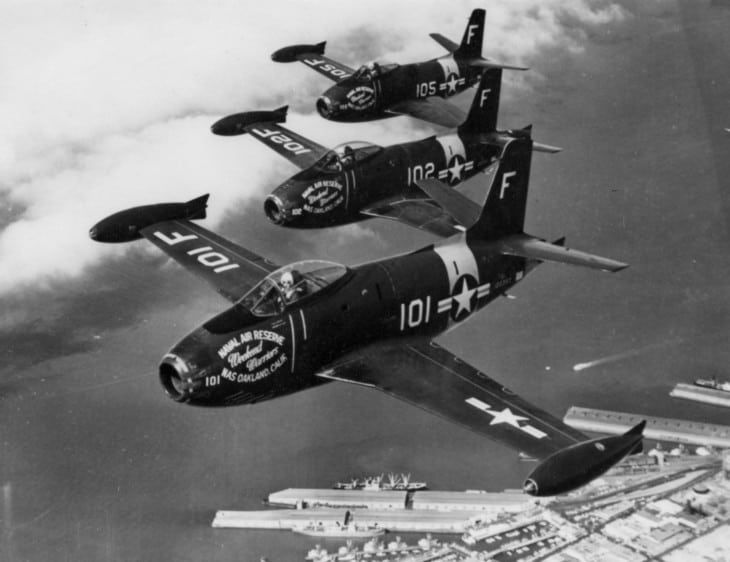 During late 1944, the Fury started as a straight-wing fighter aircraft with tricycle landing gear and a single turbojet engine that passes through the fuselage. It was derived from the P-51D Mustang and greatly resembled the wing, as well as the tail assembly and the canopy.

The prototype was designated XFJ-1 and was in competition during the time with the Douglas F3D Skynight and Vought F6U Pirate. On September 11, 1946, the XFJ-1 prototype took to the air for the first time. Three prototypes were built in total. In October 1947, deliveries of production aircraft started. A total of thirty-three FJ-1 Furys were built including three prototypes.

The FJ-1 is powered by a single Allison J35-A-2 engine. It is an afterburning turbojet with an eleven-stage axial compressor, eight tubular inter-connected combustion chambers, a single-stage axial turbine, and a dry-sump pressure system with spur gear pressure and scavenge pumps. The engine produces a maximum power of 4,000 lbf.