The Sikorsky S-61R is a developed version of the S-61/SH-3 Sea King Model designed as a twin-engine rotorcraft utilized in transport and search and rescue operations. The aircraft was created under license by Agusta as the AS-61R. It has been in service with the United States Air Force as the CH-3C/E Sea King and the HH-3E Jolly Green Giant, as well as the HH-3F Pelican with the United States Coast Guard. 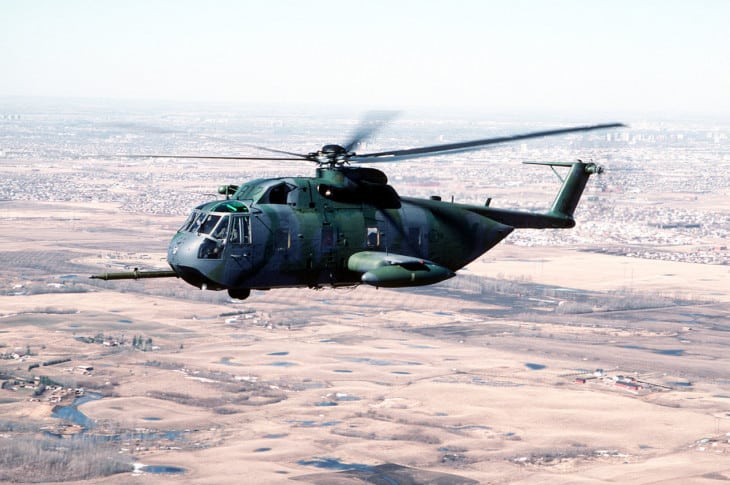 The Sikorsky S-61R was developed as a variant of the S-61/SH-3 Sea King aircraft.

In 1957, engineers from Sikorsky were developing a new model intended for the United States Navy to take over the then H-34s, utilized for anti-submarine warfare. Labeled as the HSS-2 (Helicopter, anti-Submarine, Sikorsky), this rotorcraft entered service as the SH-3 Sea King.

On January 1958, General Randolph McCall Pate, Commandant of the United States Marine Corps, requested the Chief of Naval Operations to purchase modified HSS-2s as replacement for the UH-34s. The Commandant of the Marine Corps suggested the designation HR3S (Helicopter, Transport 3 Sikorsky). On the same year, procurement funds for the aircraft were low that made the development on the design slow-moving.

On March 7 1960, thorough specification for the new helicopter were announced by the Chief of Naval Operations wherein four items were enumerated such as a rear loading ramp, fuselage that can land in water, ready for operational evaluation by year 1963, and a modification of a helicopter that had already been developed.

In 1963, the Sikorsky S-61R prototype took its maiden flight. While still under development, the United States Air Force made an order for the aircraft and was labeled as the CH-3C, utilized to recover downed pilots.

In 1965, another variant, CH-3E was built with more powerful engines. Afterwards, the upgraded HH-3E version came. Eight were built, fifty CH-3Es were converted. The HH-3E is also known as the Jolly Green Giant that had been used extensively in Vietnam War. On the same year, the United States Coast Guard placed an order for HH-3F Sea King also known as the Pelican to lengthen its offshore helicopter coverage up to 300 miles. The aircraft is equipped with search radar with a nose antenna radome offset to port, and ability to land in water.

Agusta, an Italian helicopter manufacturer built a version of the aircraft labeled as the AS-6R. The manufacturing company produced twenty-two helicopters for the Italian Air Force.

The Sikorsky S-61R features a 22-meter fuselage with a hydraulic rear loading ramp for wheeled vehicles to be loaded directly into the rotorcraft. It has an exterior height of 5.51 meters and width of 18.9 meters, a typical but watertight hull, a 907 kg winch for internal cargo handling, a retractable tricycle type landing gear, and a gas turbine Auxiliary Power Unit. The armament includes door guns on some versions.

The Sikorsky S-61R is powered by two General Electric T58-GE-10 turboshaft engines with a maximum thrust of 1,500 horsepower each. It drives a 5-blade main rotor and 5-blade tail rotor. The main rotor diameter is 19 meters, the 5-bladed main rotor area is 280.5 square meters with blade section of NACA 0012.

The United States Air Force versions were used in various air rescue squadrons and aerospace rescue and recovery squadrons for USAF major commands around the world. It had also been used by several Air Force Reserve Command and Air Guard rescue squadrons. In 1990, all HH-3Es retired from service.

There were also transatlantic flights performed by the helicopter between May 31 and June 1 1967.

In 1974, Agusta produced 22 helicopters to be used for sea Search and Rescue operations. In 1993, the aircraft was in service to support operations in evacuating civilians amidst natural calamities and disasters in Italy. It was also used in other SAR missions in the Middle East.