The Sikorsky MH-53E Sea Dragon is a heavy-lift helicopter that was designed to lift large payloads of cargo, including vehicles and artillery. The Sea Dragon can also transport up to 92 combat troops in the cabin and on an external sling. The aircraft has been used extensively by the US Navy for anti-submarine warfare (ASW) and search and rescue missions, as well as special operations. 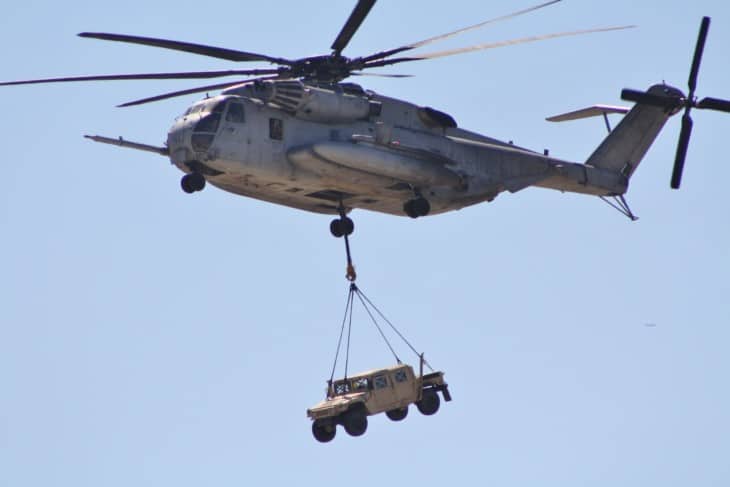 The U.S. Navy uses the MH-53E for air mine countermeasures, anti-submarine warfare, logistics support, search and rescue, special warfare support in addition to other missions as directed by the Commander Naval Air Systems Command (NAVAIR). The aircraft has been serving with distinction since it was first introduced in 1981.

The Sikorsky MH-53E Sea Dragon is one of the most powerful helicopters ever built, with an impressive range of capabilities that make it ideal for military operations around the world. From providing supplies to troops on land to carrying out search-and-rescue missions at sea, this helicopter can do it all.

The MH-53E Sea Dragon is powered by twin General Electric T64 turbo shaft engines that give the aircraft a cruise speed of about 145 knots and an operational range of almost 1,000 nautical miles. A large lifting capacity and heavy payload—up to 19,800 pounds (9,000 kg)—make this helicopter a real workhorse.

The MH-53E Sea Dragon was first introduced in 1980 and the U.S. Marine Corps began replacing its CH-53 Sea Stallions with MH-53Es in 1986, making the aircraft one of the most modern heavy lift helicopters in the world.

The MH-53E Sea Dragon’s lift capability is comparable to that of a CH-47D Chinook helicopter; both can carry loads up to 16,000 pounds (7,300 kg). The Sea Dragon has the ability to transport or sling load an object larger than its own fuselage — it can carry a CH-53D helicopter for example.

U.S. Navy’s MH-53Es have been actively deployed since the early 1980s in both operational and contingency environments including Grenada, Panama, Somalia, Rwanda, Haiti and more recently in Afghanistan and Iraq. The U.S. Navy has announced that it is initiating a Service Life Extension Program (SLEP) for the MH-53E’s airframes with the first upgraded helicopters scheduled to enter service in 2021.

The SLEP is expected to extend the aircraft’s service life by 20 years and will require an upgrade of almost all components. Sikorsky has been contracted to perform this work and the U.S. Navy plans to completely remove and replace all MH-53E components including the airframe, main rotor blades, engines, avionics systems and exterior surfaces.

The MH-53E is designed to operate from both aircraft carriers and large amphibious assault ships such as America (LHA-6), which carries four helicopters. The aircraft is also capable of operating from small amphibious ships, guided missile cruisers and other surface combatants such as destroyers and frigates.

The Sikorsky MH-53E Sea Dragon has been sold to the Japan Maritime Self-Defense Force and the Republic of Korea Navy. Turkey, India and Taiwan have also been customers for this versatile helicopter, which can be used in a variety of roles including anti-submarine warfare (ASW), special operations support and search and rescue.

The Sikorsky MH-53E Sea Dragon is truly one of the most impressive helicopters in the world. The aircraft’s ability to make vertical landings and take-offs, its exceptional range and payload capabilities, combined with its availability on Navy amphibious ships makes this helicopter a highly valued element in today’s global security environment.