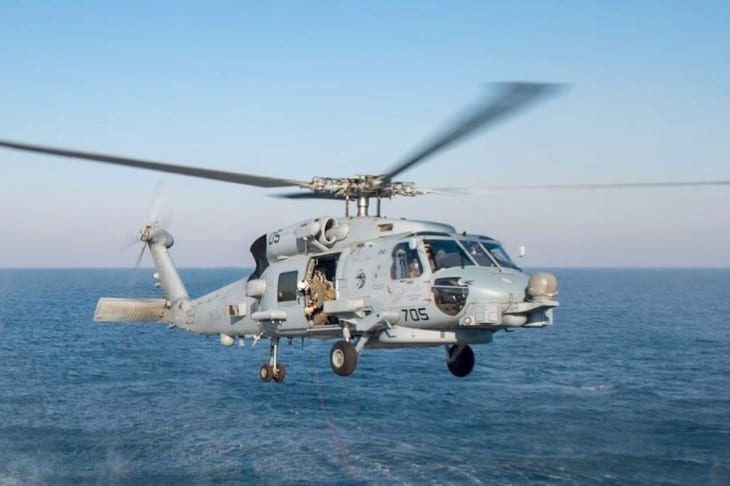 The MH-60R was designed and developed by Lockheed Martin in partnership with Sikorsky Aircraft Corporation to meet a U.S. Navy requirement for an all weather, day or night, shipboard helicopter capable of carrying out anti-submarine warfare (ASW), anti-surface vessel warfare (ASuW), vertical replenishment (VERTREP) and search and rescue missions at sea around the world, including open ocean areas within 200 nautical miles from shore as well as littoral areas near coastal regions.

The U.S. Navy uses two different versions of this helicopter: the HH-60H Rescue Hawk which it operates from its supercarriers to conduct SAR; and the SH-60B/F Seahawk that fly from destroyer-size ships for ASW. While the Army and Air Force primarily use their own versions of these helicopters; “the Navy has always had a large amount of interest in this aircraft, as it’s used both on cruisers and destroyers,” said Billie Cooper, Sikorsky’s director of marketing for military helicopters.

The MH-60R and its predecessor, the Sikorsky SH-60B Seahawk, are among the most capable and versatile multirole helicopters employed in naval aviation operations. These aircraft have been upgraded frequently with new electronics and hardware to maintain their interoperability with U.S. Navy surface combatants.

“The MH-60R is a very effective platform for conducting the Navy’s maritime mission, and for prosecuting submarines at sea. It has been a very successful program” said Rick Lamplugh, president of Lockheed Martin Rotary Mission Systems in Owego, N.Y. “The crew is extremely pleased with this aircraft.”

The MH-60R “is an improved capability to find surface ships, submarines, [and] conduct search and rescue missions”, said Capt. Stu Tudor, program manager of the Navy’s Helicopter Sea Combat (HSC) Program. The helicopter has been procured in significant numbers to replace existing SH-60Bs in the U.S. Navy inventory.

A Seahawk weighs approximately 7,000 pounds empty and can carry up to 20,000 pounds of external stores.

How big is a Seahawk helicopter?

It measures 55 feet in length (nose to tail) and has a maximum rotor diameter of 48 feet. The width is about 15 feet, and its height is about 10 feet.

How fast is a Seahawk?

How high can a Seahawk fly?

An MH-60R, fully loaded with fuel and ordnance, has an absolute ceiling of 13,100 feet mean sea level (msl), but may not be able to maintain altitude above 15,000 feet due to the risk posed by oxygen deficiency at higher altitudes.

How maneuverable is a Seahawk?

The MH-60R can perform high and low pirouettes, single engine climbs and descents,  tight turns within 90 feet of the ground with positive control of altitude. An MH-60R demonstrated an extremely tight turn radius of 714 feet during flight testing; a second aircraft achieved a 696-foot turn radius.

How many people does a Seahawk carry?

It has a crew of four:  two pilots, one naval flight officer (NFO) and an aircrewman (AC). It can accommodate seven passengers or 1,500 pounds of cargo in its cabin.

What is the maximum range of a Seahawk?

An MH-60R can fly more than 300 nautical miles (nm) without refueling; a reserve fuel tank in the X-brace of the fuselage can extend that range another 150 nm.

Can an MH-60R land on the flight deck of an aircraft carrier?

Yes, it is certified to operate from “flat tops” up to the size of the U.S. Navy’s nuclear-powered aircraft carriers.  The helicopter can land and take off while carrying a maximum payload of 3,000 pounds on deck; its operational altitude is 100 feet above sea level (asl).

How fast does an MH-60R rotate?

“It takes four seconds to roll from 90 knots to hover”.

The Navy has so far procured 46 helicopters at a cost of US $47.7 million per aircraft, not including the Government Furnished Equipment (GFE) installed in the aircraft. The GFE costs are considered proprietary and neither Sikorsky nor Lockheed Martin would provide an estimate for the GFE costs.