The Sikorsky CH-53K is a state of the art helicopter in development by Sikorsky Aircraft since 2008. Designed to carry heavy loads, this new aircraft will be able to lift up and transport 80% more weight than its predecessor, the CH-53E Super Stallion. It has an increased payload capability over previous models, enhanced flight performance with a wider range of operating speeds and altitudes, as well as improved survivability against ground fire. 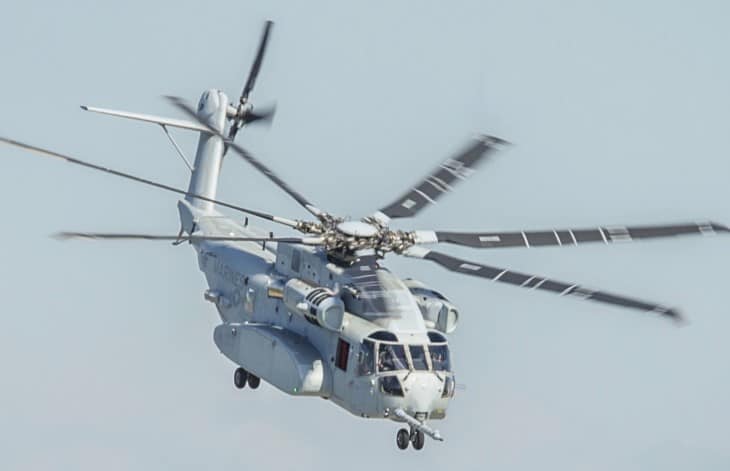 Development of the Sikorsky CH-53K began in 2008 by Sikorsky Aircraft for the US Marine Corps.

The CH-53K King Stallion is a compound helicopter with two pairs of engines, one on each side: there are two Pratt & Whitney PW207B turbo shaft engines in tandem driving a common gearbox and power all four rotors. The engines have been developed from commercial aircraft engines. The two inboard rotors are propelled by one engine each, while the two outboard rotors share the power of a single engine. One advantage is that the CH-53K will not lose any lift when an engine fails, since all four rotors’ blades are driven by either of the two available engines.

The top speed of the CH-53K is 155 knots, with a range of 800 nautical miles (1,350 km). It can climb at an average rate of 18 m/s. Maximum payload capacity will be 35 soldiers and 60700 kg (136500 lb) of cargo. The helicopter has been designed to operate from various ships including aircraft carriers, amphibious assault ships and land bases. It will be able to carry an internal payload of up to 26,000 lb (11 tonnes). A winch capable of pulling up 3.5 tons is planned for the cargo hook.

The CH-53K will be able to carry a wide range of systems including internal troop seats, external weapons mounts as well as auxiliary fuel tanks. It features automatic flight control software that enables the aircraft to land safely with rotorcraft damage forward of the cockpit.