“From the Halls of Montezuma to the Shores of Tripoli,” the United States Marine Corps has been involved in some of the fiercest combat in US history – and thus requires helicopters worthy of “The Few, the Proud, the Marines.”

Part of the reason the USMC is such a vaunted fighting force is that they are incredibly versatile. The Marines don’t just go to war on land, on sea, or in the air, but all three.

This means that the helicopters they require need to be able to suit different conditions.

Some helicopters need to be able to hold their own in the thick of battle. These often feature sturdy armor and are well-armed.

On the other hand, others are needed for missions where speed is of the essence. These need to be not just fast but highly agile and maneuverable.

Other times, the USMC needs to drop troops into battle. These need to be able to not just airdrop troops or evacuate them from dangerous situations on rescue missions, but do so with a blend of speed and armor that can help them survive a firefight.

The Marines fight everywhere any time they’re needed – and thus need many types of marine helicopters that can do the same, such as those listed here.

After more than three decades of service, the SuperCobra was retired in 2020. It’s been employed in everything from the US invasion of Grenada to its much more extensive role in the Iran-Iraq War, with them being particularly effective against vehicles.

The SuperCobra was also used during the Lebanese Civil War. However, it has also been vulnerable to attack from surface-to-air missiles, as was the case in 2016, when militants operating for Kurdish PKK were able to shoot down a Turkish SuperCobra, making use of a 9K38 Igla missile launcher.

Bell has been a big name in American aviation, and the Viper is the latest of its many helicopter creations, with its debut set to replace the SuperCobra. In 2010, it was approved for full production and was then declared to be combat-ready by the United States Marine Corp.

In 2015, the United States approved the sale of Vipers to Pakistan. They aren’t alone, either, as a number of countries have expressed interest in purchasing Vipers or have already done so, including Poland, the Czech Republic, Romania, Morocco, and Bahrain.

More famously known as the “Huey,” and originally designated the HU-1 (hence the nickname) this is the most well-known helicopters of the Vietnam War, seeing extensive combat during the Easter Offensive in 1972. Seven thousand thirteen UH-1s were deployed in Vietnam, of which 3,305 were downed, with more than approximately 2,800 fatalities.

It has been manufactured for militaries the world over, seeing action in such diverse actions as the Falklands War between Argentina and Britain to Japan, which deployed Hueys to Pakistan for disaster aid and used two Hueys for surveying the coast in the midst of the 2011 Fukushima Nuclear Disaster.

There was a period of time when this helicopter was at the core of the US military, having an active role in Vietnam. It remains an important helicopter for the US military today, and has been a key part of the USMC arsenal since the 1990s.

The USMC isn’t the only one who operates these helicopters. Israel has also used them, with engagements on their part including some of their wars with Lebanon, and in 2015 they leased some retired Cobras to Jordan to help combat Islamic State.

The design for this helicopter by Sikorsky was selected over one for Boeing, a YCH-53A prototype debuting in 1964. However, it would be many more years before the Super Stallion would properly debut, first flying in 1974 and being formally introduced in 1981.

Two were dispatched to airlift Americans out of Mogadishu during the Somalian Civil War, which also saw them involved in the Gulf War, and were likewise involved in the 2003 War in Iraq, with Super Stallions being involved in the rescue of US Army private Jessica Lynch.

One of two current helicopter models that can serve as “Marine One,” (which was called “Army One” prior to 1976) the helicopter tasked with carrying the President of the United States. It has operated in that capacity since 1976, with eight being built plus two helicopters converted for that purpose.

The second USMC helicopter that can serve as “Marine One,” the White Hawk is otherwise used by the US Navy, debuting in 1985. After having served in the Navy for decades, the last active-duty White Hawks returned in 2015 aboard the USS Theodore Roosevelt to enter storage.

The White Hawk has also proven to be popular on the international market as well, with South Korea, Tunisia, and many other nations either acquiring them or have considered doing so. On the other hand, Mexico has recently cancelled an order for White Hawks to reduce government spending.

The White Hawk measures 64 ft 8 in. with a maximum speed of 168 mph as powered by 2×General Electric T700-GE-401C turboshaft engine, a crew of three to four, and can carry two MK 46/50/54 torpedoes, Hellfire missiles, Penguin missiles, and an Advanced Precision Kill Weapon System.

Nicknamed “the Twin Huey,” this is another case of a helicopter that was historically used by the USMC but is no longer, though it’s still employed by the US Air Force. The US Navy and Royal Canadian Air Force are also past users.

During the Vietnam War, the Twin Huey was used for reconnaissance and other purposes, and was retired by the USMC in a 2014 ceremony. It was also employed on the Argentinian side of the Falklands War, and also saw action in the drug war in Colombia, and many other fronts.

The Twin Huey measured 57 ft 8 in., had a four-person crew, could carry six to eight troops or 4,400 lbs of cargo, had a maximum speed of 150 mph as powered by 1×Pratt & Whitney Canada T400-CP-400 coupled turboshaft engine, and could be armed with rocket pods and 1xGAU-16 machine gun.

The first real transport helicopter employed by the United States, the HRS-1 Chickasaw was used a lot during the Korean War, which was the first conflict in which helicopters played a major role for the US Armed Services. The helicopter was also used extensively by France in Algeria’s War for Independence.

A variant, the H-19, was also used by France in the First Indochina War, which in turn would give way to the Vietnam War. A few war-used H-19s entered use for the Republic of Vietnam Air Force, seeing a small amount of action in the war’s early days.

A popular helicopter in the 50s and 60s, more than 2,100 Chocktaws, with the French Army Light Aviation using it during the Algerian War for Independence. They assisted with troop transportation, dropping them into enemy territory, which helped pioneer some tactics for helicopter and general airmobile warfare still used today.

They were also used during the Vietnam War. A famous photo essay of the era, “One Ride with Yankee Papa 13” by photographer Larry Burrows, prominently featured a Choctaw during different stages of a combat mission in which several members of the crew were tragically wounded or killed.

The Choctaw measured 47 ft 2 in., could transport between 12 to 18 troops and eight stretchers depending on the variant, and could obtain a maximum speed courtesy of a 1×Wright R-1820-84 Cyclone engine.

This was to be yet another version of “Marine One” but was soon cancelled. Despite the fact Lockheed had won a contract to design a helicopter for this purpose early in the 2000s, by 2007, members of the Pentagon were already discussing scrapping the project.

That possibility became reality in February 2009, with President Obama saying, “The helicopter I have now seems perfectly adequate to me,” nixing it in a bid to cut spending. Nine VH-71s were completed before the project was nixed, which may have been scrapped for parts.

A helicopter that figures to be a mainstay of the USMC for decades to come, the King Stallion made its debut with the branch in 2018. They aren’t alone, either – after a good showing at the Berlin Air Show, Israel and Japan expressed interest in acquiring it.

However, Germany itself seems to be backing off it, with the German Ministry of Defense formally cancelling their order for between 45 and 60 helicopters after reevaluating them and deciding they were too expensive.

The King Stallion measures 99 ft, has a crew of four, can transport 30 passengers and a general payload of up to 35,000 lbs, and has a maximum speed of 200 mph courtesy of 3×General Electric T408 (GE38-1B) turboshaft engines.

One of the more prominent transport helicopters in the USMC’s current repertoire, the Osprey was born in the wake of the death of Operation Eagle Claw, the failed mission ordered by President Carter during the Iranian Hostage Crisis in 1980. The US’ helicopters’ failures underscored the need for new ones.

Even so, the development of this helicopter was extremely long – not only did it take until 1989 for it to have its first test fight, but it then took until 2007 for it to be operational. Since then, the Osprey has seen extensive use in Iraq and Afghanistan. 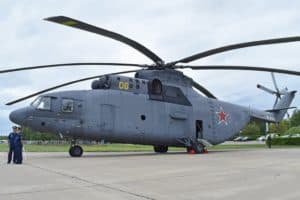 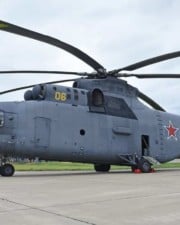