If you know a thing or two about helicopters, then you probably know that they are among the most reliable types of aircraft. They can be used by organizations, hospitals, media stations, police, the navy, the military, and other government organizations for various purposes, mainly to carry people, troops, and cargo.

Heavy lift helicopters are designed with impressive abilities to carry over 50 tons and place materials where they need to go faster, especially in remote areas. Some heavy-lift helicopters have been a top choice for corporations, civilians, and military branches that need heavy loads transferred from one location to another.

Since their implementation in the ’40s, helicopters have done a great job moving large freight cargo, evacuating troops, and other life-saving activities. If you’re curious to know some of the world’s best heavy-lift helicopters in the world, this post is for you. Here are the top-heavy lifters of all time based on how much weight they can lift.

Popularly known as Halo, the MI-26 is the world’s largest helicopter in production. This heavy twin-engine transport helicopter is Russian-made and was manufactured for both military and civilian operations. It was designed and developed by the Mil Moscow Helicopter Plant.

Since its first appearance at the Paris Air Show in 1981, Halo has been sold worldwide to over 20 countries. It is available in 13 variants that can lift up to 56 tons and has been used over the years to transport virtually everything that can be carried safely in the sky, such as smaller helicopters.

While its development began in the early 70s, designers had bigger plans and a goal to produce a helicopter with a capacity twice any modern machine could have. Halo started its operation in 1983.

When it comes to specs, Halo’s charge area with rear ramp closed is 12m long, 3.2 m wide, and has a minimum cling height of 2.9m.  The interior can hold 80 combat-equipped troops or six stretchers, but there are rare cases where it flies carrying 150 troops.

The King Stallion is an upgrade of the CH-53E super stallion, which was previously the biggest and heaviest helicopter outside Russia.

Today, the CH-53K King Stallion is the US military’s most powerful, biggest, and heaviest helicopter. It was also designed to meet the needs of the US marine corps and will serve as its critical sea and land-based logistics connector.

This version allows international militaries and US marine corps to move troops and equipment from the ship to the shore and other higher altitude terrains faster and efficiently.

It is built to thrive in the modern battlefield, including shipment operations. The CH-53K is more intelligent, reliable, survivable, and low maintenance as it is designed to withstand the most remote and austere operating bases.

When it comes to the specs, the larger cabin can carry 463l or 37 troops comfortably. It can deliver supplies, vehicles, soldiers, and other materials required in larger quantities, such as heavy weapons, military vehicles, and 55 seated soldiers. Its speed is 172 miles per hour, and its weight when empty is 88,000lbs.

The CH-53e super stallion has been one of the heaviest and largest US military helicopters in use until the CH-53 K Super stallion arrived and took over.

The CH-53 made its first entry into the industry in 1974 but entered service fully in 1981 under the US marine corps. It forms a crucial element of composite squadrons supplying heavy cargo and supplies for amphibious assault missions.

So far, out of the 172 stallions delivered, 162 are in service with the Pacific and Atlantic fleet. It is designed with a lifting capacity of more than 33t. It can lift the a155mm howitzer along with the crew and ammunition. Three general electric turboshaft engines, T64-GE-416/416A, power the stallion. Each engine produces 3,270kW rated power that ensures the helicopter can take off with a maximum weight of 73,500lb.

This helicopter has a maximum weight of 10,740lbs when empty and a total speed of 196mph. It can carry two pilots, 38 troops, or 24 stretchers. The stallion is nicknamed the ” Hurricane maker” from the downwash it generates, and it’s mighty enough to lift an aircraft as heavy as itself.

Another great product by the Russian Mil Moscow Helicopter Plant is the MI-10, which entered service in 1962. It is a flying crane configuration of the MI-6 that retains many of the equipment and systems such as the rotor, engines, and transmission system.

This helicopter was operated by the Russian Air Force and other smaller civil agencies. It has made significant improvements, such as the fuselage, which has a shallower cabin and a more resounding tail boom to allow more cargo to be hoisted. It is also a twin-wheeled undercarriage to enhance its heavy lifting capacity.

Going forward to the specs, the MI-10 has a maximum take-off weight of 96,340lb and can seat 28 passengers in the cabin. Harke features two Soloviev D-25V turboshaft engines, each developing a maximum power output of 5,500hp. The big external fuel tanks aboard provide a full range of 267mi. Its maximum weight when empty is 54,410lb and has a top speed of 146mph.

Developed to meet the US Army requirements, the CH-47 first flew in 1961. The utility helicopter became fully operational in 1962. Since then, 1160 of its kind have been built, including model license-produced in Japan and Italy and exported all over the world. The upgraded Chinooks are designed to remain operational with the US army beyond 2060 and the years to come.

Some of the well-known missions Chinooks have been used in the past include Operations Desert Shield, desert storm, and the Gulf War. When empty, the CH-47 Chinook weighs 23,400 lbs. and its maximum take-off weight is 50,000lb. This means the Chinook can lift about 26,600 lbs, or about 12065 Kg.

Produced as part of a strategic alliance between Boeing and Bell helicopters, the V-22 Osprey is a unique aircraft with multi-transmission abilities. That means it is more of a tiltrotor than an actual helicopter.

However, it is used for the same purpose as helicopters by combining its vertical lift capabilities with the flight speed of a fixed-wing turboprop aircraft. It can take off or land vertically and reach a greater altitude at high speed of up to 280kt. Compared to other utility helicopters, this aircraft can fly twice the speed.

The V-22 is fitted with two powerful Rolls-Royce engines whose nacelle can rotate to change the aircraft into a turboprop plane. The engines develop a powerful 6-150shp each and are capable of air-to-air refueling. Thanks to the rotatable wings and foldable rotors, the Osprey can be compactly stored on board an assault ship or an aircraft carrier.

The navy, Marine Corps, and the US army use the V-22 Osprey for different missions like delivery. It is an interesting aircraft with incredible abilities as it can refuel in the air and land on ships and other vessels. It is currently one of the largest VTOL aircraft and accommodates 24 troops or 19,800 lbs internally and 12,500 lbs externally.

The MI-38 was developed as a multirole helicopter by the Mil Moscow Helicopter Plant. That means it can be used for search and rescue missions, transport passengers and cargo, perform offshore tasks, and air ambulance services. Its flexible and strongly built configuration enables successful operations in hostile and versatile tropical, cold, and maritime environments.

The MI-38 is an upgrade to the MI-17 series, but it was initially built as an improved version of MI-8. However, there are many notable differences in the newer version. It is an entirely new design, which means the developers put in a lot of critical and creative thinking to come up with more contemporary ideas that were not included in the previous versions.

For instance, it has new engines, airframes, avionics, and rotor systems. It seems to be a new generation of its own that began in 2008.

As for the specs, the MI-38 can carry 32 troops and 16 stretchers. The cabin is large and unobstructed, measuring 16m squared.  The deck can take only two pilots, but one pilot can operate the aircraft. It can carry 11,000lbs internally and 15,000lbs externally.

Also called the “Super cougar” or “Caracal,” the EC 725 was built in France to improve search and find rescue missions. It first made its way into the sky in 2000 and was delivered to the French air force in 2005.

It is a long-range tactical transport helicopter that evolved from the Eurocopter Puma family. Today, it has been adopted by Indonesia, Mexico, Malaysia, and other countries interested in ordering this aircraft. Apart from search and rescue operations, this helicopter is a heavy lifter that can be used to transport cargo, troops, and other materials required in often unreachable terrains.

When it comes to the specs, the EC 725 has an external payload of 9,900 lbs. and an internal payload of roughly 12,500 lbs. It is capable of carrying 28 troops. It can be fitted with add-on armor plating to operate in combat environments. 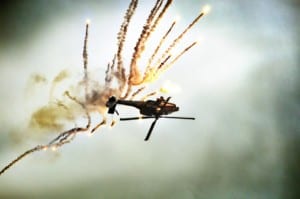