The Sikorsky VH-60N White Hawk is a special version of the UH-60 Blackhawk military helicopter used for transporting the United States president as Marine One. 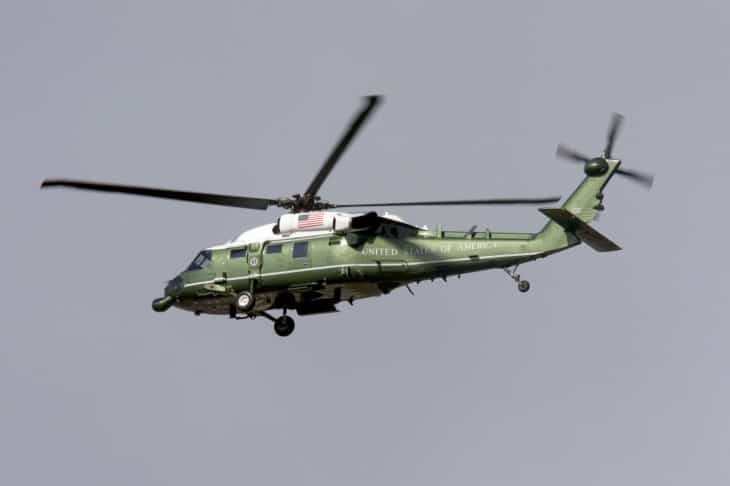 The UH-60 Blackhawk or Sikorsky S-70 is a U.S medium transport/utility helicopter built by Sikorsky Aircraft. It was designed for the United States Army during the 1970s and won in a competition that led to its designation “UH-60 Black Hawk” and created a vast family in the military service of the United States.

The helicopter was built in several improved variants since then. The H-60 series is greatly used by the Department of Defense and is equipped to fulfill a wide range of roles such as air cavalry, electronic warfare, search and rescue, aeromedical evacuation, and other special missions.

Some aircraft are used for the transport of the United States President as Marine One. The VH-60N is an executive transport helicopter based on the UH-60 Black Hawk and the United States Navy’s SH-60 Seahawk aircraft. In 1989, it was initially delivered to HMX-1 to replace the VH-1N.

The VH-60N is equipped for day/night and all-weather operations. It features self-contained navigation that does not depend upon externally transmitted data, GPS, Traffic Collision Avoidance System to reduce the incidence of mid-air collisions, and CSFIR sensors, and without any weapons.

The VH-60N is powered by two General Electric T700-GE-401 turboshaft engines. The engine has a 6 stage-5 stage axial one-stage centrifugal compressor, annular combustors, two-stage gas generator and two-stage power turbine, and self-contained, pressurized recirculating dry-sump oil system. Each engine produces a thrust of 1,890 hp. The helicopter has a maximum speed of 159 knots and a travel range of 1,199 nautical miles. it can fly up to 19,000 feet and can climb at a rate of 700 feet per minute.