The MH-60 Jayhawk is a medium range, search and rescue aircraft manufactured by Sikorsky. The aircraft is equipped with advanced navigation equipment utilized for law enforcement, military readiness and environmental protection operations by its primary user, the United States Coast Guard. 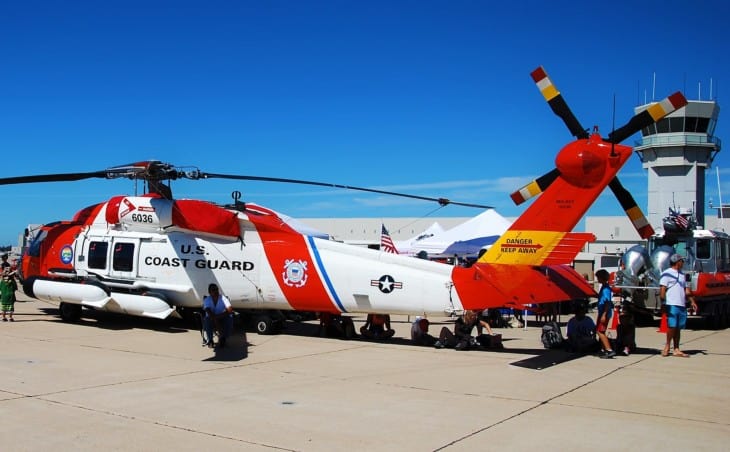 In September 1986, the aircraft manufacturer Sikorsky started to develop the HH-60J as a replacement to HH-3F Pelican, a twinjet used for search and rescue operations in the early years. Compared to the previous aircraft, the HH-60J has several upgrades including lighter weight, faster speed, and outfitted with revolutionary avionics and high-powered engines. The HH-60J was originally based from SH-60 Seahawk.

On August 8 1989, the HH-60J with registration number 6001 made its first flight. In March 1990, the aircraft’s first delivery to the United States Coast Guard for developmental testing took place at NAS Patuxent River in Maryland.

After a year, the Aviation Training Center in Mobile, Alabama was the first United States Coast Guard unit to fly the aircraft in preparation for the pilot training of instructor pilots.

There were forty-two units of HH-60J produced from registration number 6001 to 6042.

In 1996, production of the HH-60J ceased after finishing the forty-two units on contract. Later on, in January 2007, the United States Coast Guard started the conversion of the 42 HH-60Js into MH-60Ts.

The improvements in electronics is under the Integrated Deepwater System Program of the United States Coast Guard. It includes a glass cockpit, upgraded electro-optical/infrared, radar sensors, and Airborne Use of Force (AUF) capabilities for military or mission operations.

In February 2014, the upgraded MH-60T were accomplished.

The MH-60 has an exterior length of 19.8 meters, height of 5.2 meters and fuselage diameter of 3.16 meters. The empennage is positioned a bit lower on the fuselage, outlining from the bottom with a vertical stalk that holds the tail rotor. Horizontal planes are positioned to the bottom of vertical fin, and it is equipped with retractable tricycle type landing gear with a wheelbase of 7.92 meters. There is a 61 meter rescue hoist suited to the starboard part of the fuselage. It attaches to the aircraft through a mount fitted on top of the side cabin door so it will not block the entry and exit.

The cockpit of the MH-60 Jayhawk can be accessed through the main cabin or through two automobile-style hinged doors located on both sides of the cockpit. It is also fitted with large windows and forward viewing ports on the floor sides for better outward visibility during missions. The aircraft is also equipped with a Forward Looking Infrared (FLIR) that supports the pilot while flying at night or in fog. The aircraft cabin has a length of 6.8 meters, height of 2.1 meters and width of 2.9 meters. It has sizeable cabin doors for easier boarding and deboarding of crew. The MH-60 Jayhawk can accommodate up to four crew.

The MH-60 Jayhawk is fitted with twin engines attached on top of the fuselage. These engines are T700-GE-401C from General Electric. Each turboshaft engine has a maximum thrust of 1,890 shaft horsepower. It has a length of 1.2 meters.

The aircraft has a cruising speed of 135 knots to 140 knots and can reach up to a maximum speed of 180 knots for short duration. It can travel at 140 knots for around six to seven hours, it has a travel range of 700 nautical miles, service ceiling of 5,000 feet and a rate of climb of 800 feet per minute. It has a maximum take off and landing weight of 9,926 kg and 9,510 kg respectively.

On December 8 2004, an HH-65 was washed out by large waves while on a search and rescue mission at Unalaska Island. The engines of the aircraft burst into flames and descended into the sea.

On March 3 2010, an MH-60T crashed in Wasatch County due to pilot error. The pilots were not able to adapt to flying over snowy mountainous terrain and weren’t able to anticipate how this would greatly affect performance of the aircraft.

On July 7 2010, an MH-60 crashed near James Island when it hit a large power cable that run from La Push to James Island. The accident killed three crew on board.