The Kawasaki C-1 military transport aircraft has significantly contributed to the improvement of transportation capabilities of the Japan Air Self Defense Force. The aircraft was exclusively used by the JASDF in lieu of the ancient World War II Curtiss C-46 Commando fleet. 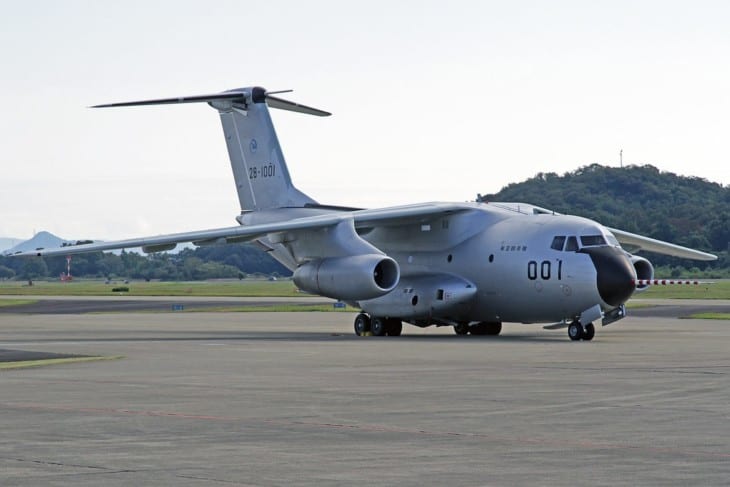 In 1966, development of the C-1 started when Japan Air Self Defense Force (JASDF) approached the Nihon Aircraft Manufacturing Corporation (NAMC) to design an indigenously jet powered aircraft to replace the old Curtiss C-46 Commando fleet. NAMC then selected the Kawasaki Heavy Industries to serve as the main contractor of the aircraft. Aside from Kawasaki’s contribution to the design, other manufacturing companies also took part in the development of the C-1. The tail section and the middle and rear sections of the fuselage were products of Mitsubishi Heavy Industries, the larger portion of the wings were constructed by Fuji Heavy Industries, the rudder was developed by Shin Meiwa Industries which specializes in seaplanes, and the flaps came from NIPPI Corporation. During its development years, the Kawasaki C-1 was just the third indigenous aircraft program to be launched in postwar Japan, before the Fuji T-1 and the YS-11.

The Ministry of International Trade and Industry (MITI) in Japan showed great interest in the C-1 program. Aside from its military transport main purpose, MITI acquired the design of the aircraft as the basis for a next-generation commercial transport program. However, the desired program was not successful because of the decision to focus on international collaborations such as the Boeing 767 airliner.

On November 12 1970, the Kawasaki C-1 took its maiden flight. After a year, production of the aircraft began.

The Kawasaki C-1 is a twin-engine medium-range airlifter that slightly looked like the Lockheed C-141 Starlifter. It has an external length of 29 meters and height of 9.99 meters. It has a wingspan of 30.6 meters and wing area of 120.5 square meters. It composed of a high-lift system that has aerodynamic capabilities like a leading edge slat and a 4-stage fowler flap. It showcases a powerful Short Take Off and Landing (STOL) performance and enhanced electronic navigation systems.

The aircraft is equipped to be normally operated by five crew members, including two pilots, a flight engineer, a navigator, and a load master.

The aircraft is powered by two JT8D-M-9 low bypass turbofan engines from Pratt and Whitney. The engines were locally produced under license by Mitsubishi, with a maximum thrust of 14,500 lbf each. The C-1 also boasts its payload capacity that can carry up to eighty fully-equipped troops, forty-five paratroopers, or thirty-six stretcher-bound personnel, as well as a sizeable cargo, with a whole truck or two jeeps, that would be loaded through a ramp deployed at the rear of the aircraft.

The XC-1 were the prototypes of the C-1 series.

The C-1/C-1A is a medium-range military transport variant; the C-1 is a basic production variant with twenty-six aircraft built. The C-1A has a greater fuel capacity, five of this type were built.

The EC-1 version is designed as an electronic warfare training aircraft utilized for training purposes.

The C-1FTB variant is a flight test bed built for testing several equipment in mid-air.

The Asuka/QSTOL variant is a quiet Short Take Off and Landing (STOL) research aircraft by the National Aerospace. It is an experimental aircraft used to evaluate low-noise features and STOL capabilities. This type is equipped with four FRJ710 turbofan engines making use of the Coanda effect. It was designed to test STOL with the use of upper surface blowing, aircraft noise reduction, fly-by-wire systems, and composite materials construction. One aircraft was built and presently displayed in Kakamigahara Air and Space Museum in Gifu, Japan.