The Yakovlev Yak-38 was introduced in 1976 as the sole operational VTOL strike fighter aircraft of the Soviet Naval Aviation. It was also the first operational carrier-based fixed-wing aircraft designed particularly for the Kiev-class aircraft carriers in which it was also in service. The Yak-38 was produced from 1971 to 1981 and retired in 1991. 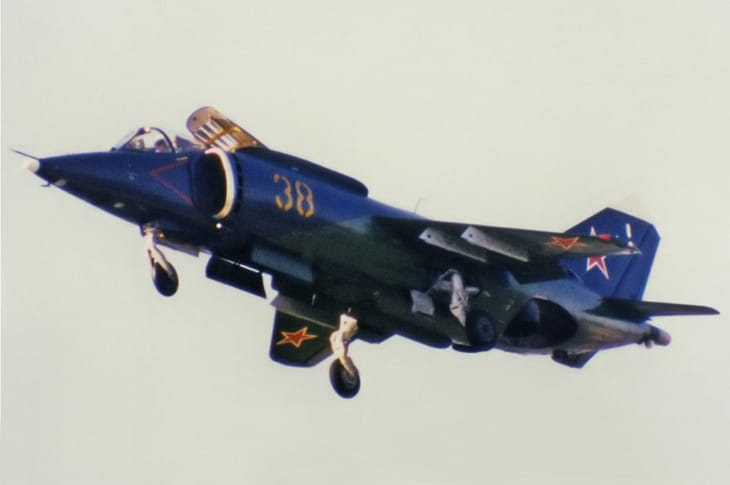 The Yakovlev Yak-38 was designed by the JSC A.S Yakovlev Design Bureau as a supersonic aircraft that greatly resembled the Hawker P.1154 but powered by two R27-300 engines. The supersonic capabilities of the aircraft connoted numerous problems in development, so the manufacturing company opted to originally build a fairly uncomplicated aircraft restricted to Mach 0.95.

On April 14, 1970, the prototype designated as VM-01 was completed. Although identical with the Hawker Siddeley Harrier on the outside, the prototype had an entirely distinct configuration. The initial pre-production variant Yak-36M Forger weighed 6,650 kg and was fitted with less powerful engines. On January 15, 1971, the first production version designated as Yak-38 “Forger-A” took its first flight. On August 11, 1976, the aircraft entered service with the Soviet Naval Aviation.

The Yak-38M “Forger-A” was an improved type of the Yak-38 with more powerful Tumansky R-28V-300 turbofan and Rybinsk RD-83 turbojet engines. The Tumansky R-28V-300 is a vectored-thrust turbofan rated at 15,000 lbf thrust for lift and cruise thrust. The Rybinsk RD-83 is a lift turbojet engine that produces a maximum power of 7,200 lbf thrust each. Following June 1985, the variant entered service with the Soviet Naval Aviation.

Fifty Yak-38Ms were produced in total. The Yak-38M has an increased maximum takeoff weight in VTOL of 11,300 kg and was also equipped to bear a 910 kg load of weapon. The aircraft has a maximum speed of 690 knots and a travel range of 700 nautical miles. It can fly up to 36,000 feet and can climb at a rate of 14,800 feet per minute. It had an exterior length of 16.37 meters, an exterior height of 2.2 meters, a tail height of 4.25 meters, and a fuselage width of 0.9 meters. The wingspan is 7.32 meters and the wing area is 18.5 square meters. It has a wheelbase of 6 meters. The aircraft can be loaded with different armaments.