The Yakovlev Yak-9 was a multipurpose fighter aircraft in service with the Soviet Union during the Second World War and onward. Introduced in 1942, it was fitted with a single seat and powered by a single-piston engine. The Yak-9 was developed from the Yak-7B and was produced from September 1942 until December 1948. 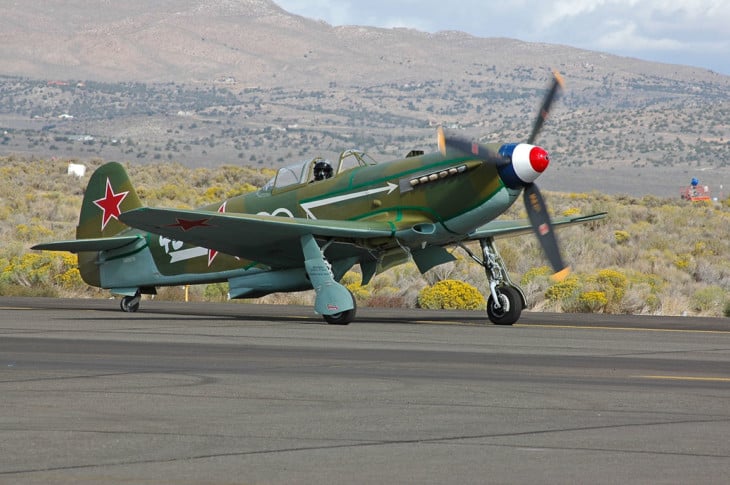 The Yakovlev Yak-9 was developed from the Yak-7 fighter aircraft. In October 1942, the initial version of the Yak-9 entered into service. Later that year when it entered into combat. The design bureau built twenty-two Yak-9 modifications, including fifteen versions produced.

Versions of the aircraft were fitted with two diverse wings, five distinct engines, six nonidentical fuel tanks, and seven variety of weapons and equipment. The aircraft boasted its maneuverability and its high-speed capability during low and medium altitudes. It was also designed with easy-to-control features that made it the most produced fighter aircraft in the Soviet during the Second World War.

The Yak-9 was the first production variant. It is powered by a single Klimov M-105PF V-12 twelve-cylinder, liquid-cooled piston engine rated at 1,180 horsepower thrust. It also had three-bladed constant-speed propellers. The engine has two intake valves and one sodium-filled exhaust valve per cylinder actuated through a single overhead camshaft per bank.

It also has a gear-driven two-speed centrifugal compressor, and a carburetor fuel system. The Yak-9 has a maximum speed of 320 knots at 14,108 feet and a travel range of 490 nautical miles. It has a service ceiling of 36,400 feet and a rate of climb of 3,210 feet per minute. The takeoff and landing distance is 340 meters and 560 meters, respectively. The maximum takeoff weight is 3,098 kg, the maximum payload is 512 kg, and the maximum fuel capacity is 110 gallons.

The aircraft was designed with a lowered rear fuselage with an external length of 8.55 meters, an external height of 2.2 meters, and a fuselage diameter of 0.8 meters. The tail height is 3 meters. The wheelbase is 5.3 meters, the wingspan is 9.7 meters, and the wing area is 17.15 square meters. It was fitted with an all-around vision canopy and armed with a 1×20 mm ShVAK cannon with 120 rounds and a 1×12.7 Berezin UBS machine gun with 200 rounds.