The Yakovlev Yak-3 was a Soviet fighter built and manufactured by the Yakovlev design bureau during the Second World War. It was a single-engine, single-seat aircraft that first flew in February 1943. The Yak-3 was produced from 1944 to 1946 and was retired in 1952 with the Soviet Air Force. 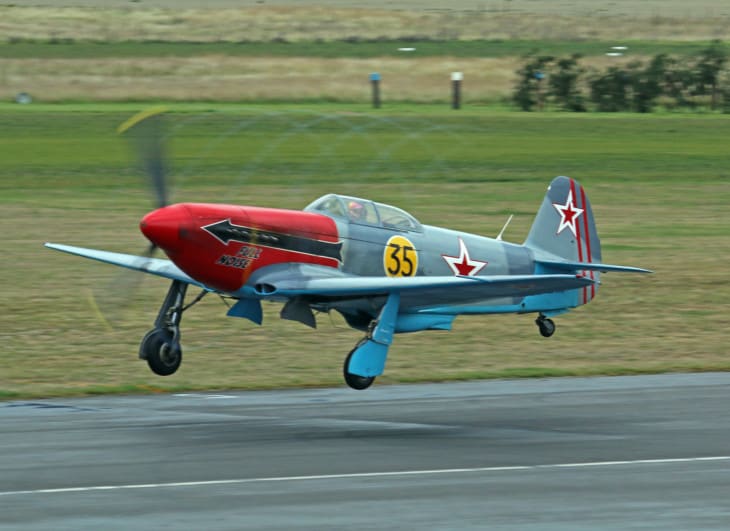 In 1943, the Yakovlev design bureau led by Alexander Sergeyevich Yakovlev started to develop the Yak-3, a more advanced derivative of the Yak-1 fighter. The aircraft was intended to refine endurance, performance in flight, firepower, which needed a lesser weight, more powerful engine, and high speed.

The first prototype designated as Yak-1M conducted its maiden flight on February 28, 1943, and was designed with a slatted wing for better handling performance in short fields. The second Yak-1M prototype was equipped with a wooden wing unaccompanied by slats to make production simpler and to save aluminum construction. The Yak-3 was produced from March 1944 to August 1946 and was retired in 1952. Its primary users were the Soviet Air Forces, French Air Force, Polish Air Force, and the Yugoslav Air Force. A total of 4,848 Yak-3s were built.

The Yak-3 was fitted with a single Klimov VK-105PF2 twelve-cylinder liquid-cooled piston engine. It has two intake valves and one sodium-filled exhaust valve each cylinder operated using a single overhead camshaft per bank. The engine also has a gear-driven two-speed centrifugal type compressor, six carburetors, and a liquid-cooled cooling system. It produces a maximum thrust of 1,290 horsepower and drives a three-bladed constant-speed propeller.