The Yak-142 is one of the variants of the Yakovlev Yak-42 three-engined mid-range narrow-body jet airliner introduced in December 1980. The Yak-142 features updated avionics and spoilers to enable faster descent, as well as a large cabin door to fit a jet bridge. The version was also designated as Yak-42A, Yak-42-100, and Yak-42D-100. 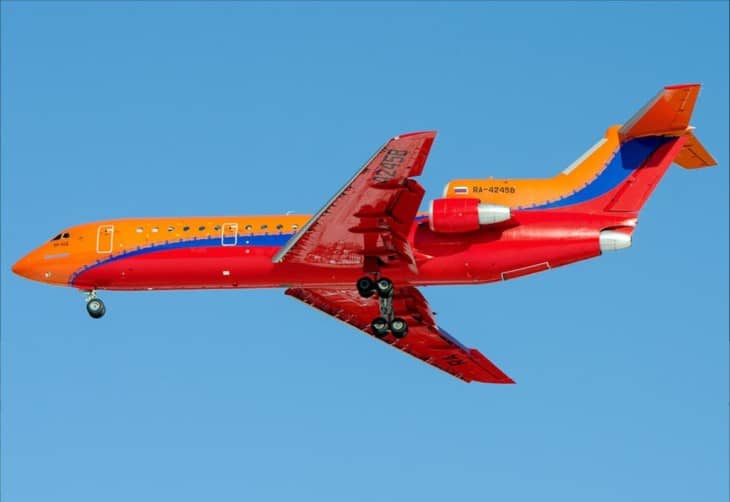 In 1972, the Russian manufacturer Yakovlev began to develop a short to medium range airliner that could carry one hundred to one hundred and twenty passengers. The said aircraft was meant to replace the current airliners of the time such as the Tupolev Tu-134, Ilyushin II-18, Antonov An-24 and An-26.

Preliminary proposed designs comprised of an aircraft with straight wings and fitted with two Soloviev D-30 turbofan engines. It took after the Yak-40, however, the design was not approved because it was viewed as not inclined to compete in comparison to other Western airliners with high-bypass ratio turbofan engines. The design bureau opted to build a three-engine aircraft fitted with Lotarev D-36 three-shaft high-bypass ratio turbofans, and as well as swept wings instead of straight ones. On April 28, 1978, the initial production aircraft was completed and on December 22, 1980, it performed its first passenger flight with Aeroflot. The aircraft was not produced in large quantities at first, with at most ten took to the air by mid-1981.

The Yak-42 is of all-metal construction and has a pressurized fuselage section. It has an external length of 36.38 meters, an external height of 5.5 meters, and the circular fuselage has a diameter of 3.9 meters. The cockpit has a tandem seating for two pilots. The aircraft is also built with airstairs located on the lower side of the rear fuselage and onward the cabin. It has a wingspan of 34.88 meters and a wing area of 150 square meters. The tail height is 9.83 meters and the wheelbase is 16 meters.

The manufacturing company built several variants for the Yak-42. The Yak-142 is a derivative of the long-range variant Yak-42D. It features a modernized, Western avionics systems from AlliedSignal, as well as spoilers to intentionally reduce the lift component in a controlled way. The Yak-142 is also fitted with a large cabin door for the jet bridge.