The Yakovlev Yak-18T was designed and manufactured by the Yakolev design bureau as a fully aerobatic utility aircraft equipped with four to five seats. It was introduced in 1967 to train Aeroflot pilots and also became popular as a sport plane in the Soviet Union and several other countries. The Yak-18T is fitted with a Vedeneyev M14P radial engine rated at 360 to 400 horsepower. 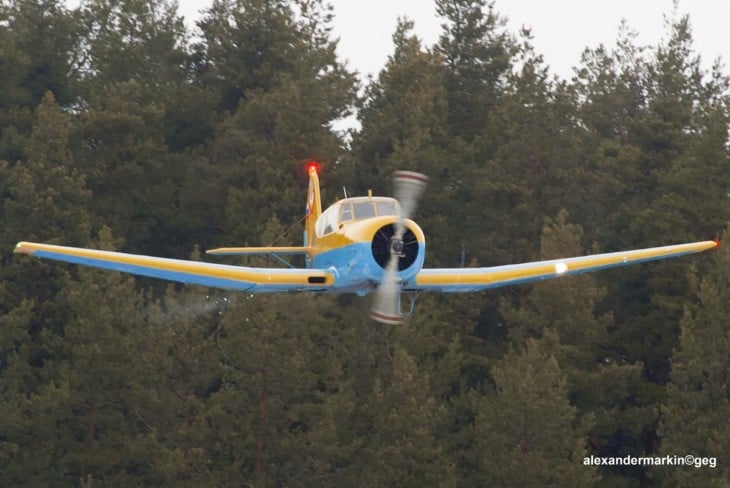 During the late 1960s, the Yak-18T was developed by the Yakovlev design bureau as a civilian aircraft. It is fitted with a nosewheel and can accommodate four to five seats. The aircraft was powered by a nine-cylinder radial engine and possessed the same systems with the Yak-50 and Yak-52 aircraft.

It featured a basic compressed-air system used for starting the engine, as well as brakes, landing gear, and wing flaps. It also had the same propeller and avionics system. The aerobatic Soviet aircraft is just a bit larger in comparison with the Cessna 172 Skyhawk and the Piper PA-28 Cherokee. However, it is greatly heavier and is fitted with a significantly more powerful and improved engine.

The aircraft is determined by its sturdy construction, aerobatic performance, and easygoing but receptive handling capabilities. In mid-1967, the Yak-18T prototype took to the air for the first time. Later, series production began in Smolensk.

The aircraft became the standard basic trainer in Aeroflot and some served as liaison and communications aircraft in the Soviet Air Force. Aircraft production ended in 1980 after around seven hundred Yak-18Ts were built. In 2011, it was stated that the aircraft continued in small-scale production by the manufacturing company.

The Yak-18T has an external length of 8.4 meters and an external height of 2.6 meters. It has a tail height of 3.4 meters and a fuselage diameter of 1.1 meters. It has a wheelbase of 2 meters, a wingspan of 11.16 meters, and a wing area of 18.89 square meters. The aircraft is powered by a single Vedeneyev M14P radial engine which produces a maximum thrust of 360 horsepower and drives a two-bladed V-530TA-D35 constant-speed propeller. It has a maximum speed of 141 knots and a cruise speed of 97 to 113 knots. It can fly up to 13,000 feet with no oxygen system.