The Northrop YF-17 was a lightweight fighter aircraft of the Northrop Corporation. It was designed for the Lightweight Fighter (LWF) Program of the United States Air Force. The YF-17 was picked for the new Naval Fighter Attack Experimental (VFAX) program. The aircraft did not successfully enter production. 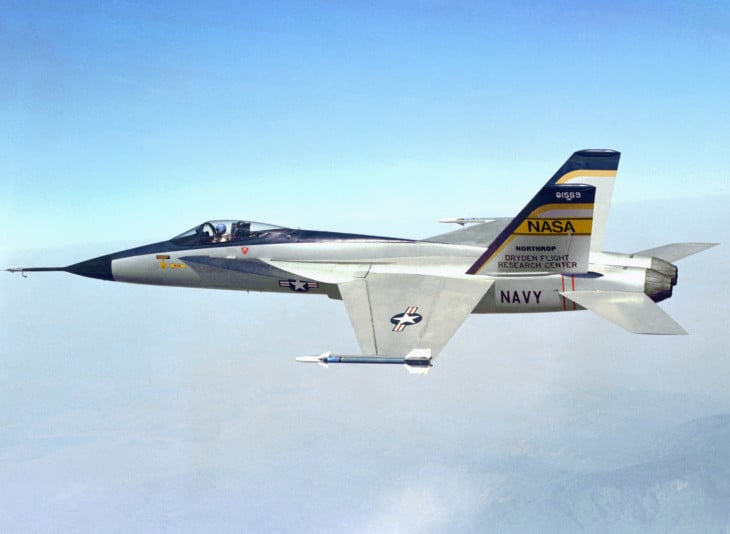 In 1971, the United States Air Force’s Lightweight Fighter (LWF) program was announced. As a response, the aircraft manufacturer Northrop reformed the P-530 into the P-600 that would be given the designation YF-17A. Although the P-530 was for multi-role operations, the P-600 was intended to be purely an air-to-air demonstrator, and in consequence, the cannon’s position was changed from the bottom part of the fuselage to the higher portion.

The Northrop YF-17’s airframe was mainly built of aluminum in a typical semi-monocoque structural system, however, more than 408 kg of it was made of graphite and epoxy composite. The aircraft has an external length of 16.92 meters, an exterior height of 3 meters, and a fuselage diameter of 0.9 meters.

The cockpit is equipped with an ejector seat that inclines at eighteen degrees. It also features a bubble canopy for a wider and unobstructed view and a head-up display that provides important data. The slim wings had a wingspan of 10.67 meters and a wing area of 33 square meters and were constructed of composite face sheets over a Nomex honeycomb core. The leading edge as well as the trailing edge were also of the same construction as the wings. A speedbrake made of composite was positioned on top and in the middle of the engines.