The Vickers Valiant is a high-altitude strategic bomber aircraft designed by Sir George Edwards and manufactured by Vickers-Armstrong. It was one of the V bomber aircraft of the Royal Air Force during the 1950s and 1960s. The Valiant was introduced in 1955 and was the first among the V bombers to enter service. 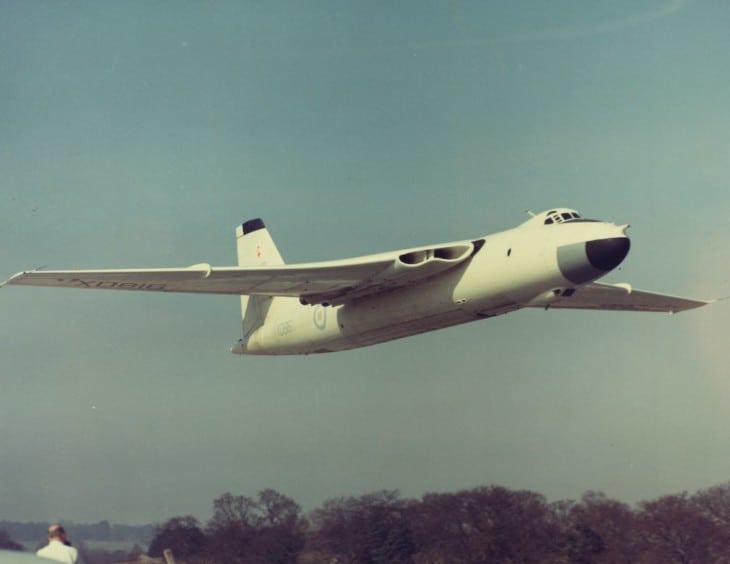 On May 18, 1951, the WB210, the first Valiant prototype conducted its first flight piloted by Captain Joseph Mutt Summers with his co-pilot, Gabe Jock Bryce. After a month, Type 660 was designated the official name Valiant where it had been chosen during a survey with employees of the company.

On April 11, 1952, the second prototype with serial number EB215 designated as Type 667 took its first flight. It was powered by RA.7 Avon engines with a maximum thrust of 7,500 lbf each. It was also designed with circular air inlets that replaced the slim air inlets of Type 660. This was designed to provide enough air to the engines.

On September 4, 1953, the third prototype referred to as Valiant B.2 with serial number WJ954 conducted its first flight. It was famous as the Black Bomber because of its glossy black paint for night operations. It had a greater performance compared to the first two prototypes and can operate at maximum power at sea level.

It was utilized for testing for several years such as rocket tests to improve takeoff. On December 21, 1953, the first production Valiant took to the skies for the first time and on February 8, 1955, it was delivered to the Royal Air Force, its launch customer. The Vickers Valiant was produced from 1951 to 1957.