The Vickers Viscount is the world’s first airliner to operate a passenger service. The Type 800 is a notable innovation of the airliner outfitted with Rolls-Royce Dart engines and designed with large rectangular access doors in place of oval doors that gives the option of transporting freight. 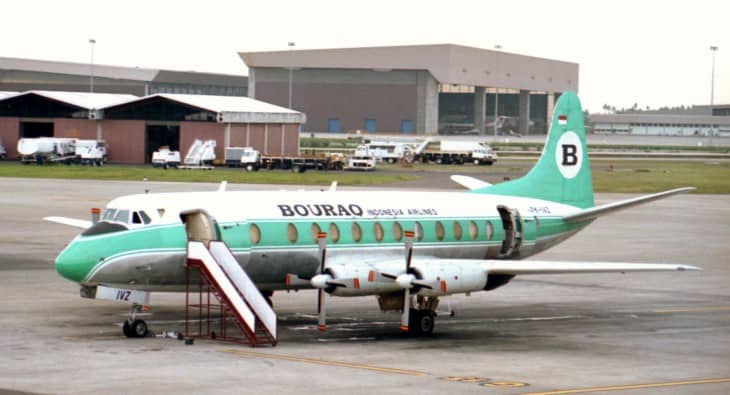 Rolls-Royce, an aero-engine manufacturing company continued to improve the potential of the Dart engine, and the British European Airways, thrilled by the chances of more power, requested Vickers to build a variant that is 4-meter longer and can accommodate eighty-six passengers. However, it turned out that this variant was not built as Vickers discovered that it could pull off just about the same outcome by moving back the rear bulkhead of the Type 700 by 2.84 meters and expanding the outer fuselage by 1.2 meters, so it can seat for up to sixty-five passengers. This proposed design was designated as the Type 800 and initially outfitted with Rolls-Royce Dart RDa6 and has a thrust rating of 1,535 equivalent horsepower. Various modifications were added to acquire the United States Federal Aviation Administration (FAA) type certification.

The Viscount 800 has an external length of 25.91 meters, height to top of fin of 8.2 meters and a fuselage diameter of 3.05 meters. It is fitted with sizeable rectangular access doors that provides the option of carrying freight. The forward door’s dimension is 1.62×1.52 meters while the rear door is 1.62×0.68 meters.

The aircraft cabin has a length of 16.46 meters and width of 2.78 meters. It has an underfloor volume of 7.02 cubic meters and rear hold volume of 3.39 cubic meters. The type 800 can accommodate up to 65 passengers onboard.

The Viscount Type 800 was initially powered by Rolls-Royce Dart 506 before it was re-engined with the more advanced Dart 510. The Dart 510 has a 1,740 take off equivalent horsepower. The operating cycle works when a large volume of air is being sucked in at the frontal part of the engine, then compressed and blown out at the back of the compressor to combustion chambers; this is where fuel is constantly sprayed in and burnt. This produces vast heat energy, with the outcome that burning columns of gas roar out of the chambers, past the turbine blades that drive the compressor, and then depart via the tail pipe toward the atmosphere as a high-energy jet stream.

In April 1954, British European Airways placed an order for 12 units. On the same year, KLM Royal Dutch Airlines in North Holland ordered 9 units of the Type 800, an unexpected event as the airline usually favored aircraft built in the United States. But the most remarkable order that year was from the Capital Airlines in the United States which ordered sixty aircraft with a total value of $ 67 million. The airliner staked its whole operation on the Vickers Viscount.

On September 21 1967, an Aer Lingus flight with aircraft registration EI-AKK approaching Bristol Airport crashed upon landing. The incident was because of an attempt to align the aircraft with the runway at too low a height because of the aircraft’s commander’s wrong and inaccurate decision to proceed with the approach when visual guidance turned unclear below critical height. A crash landing was inevitable in the course of an attempted overshoot when the aircraft met the ground and sustained damage while on a turn at a low height. There were 21 occupants onboard; everyone survived the incident.

Capital Airlines placed a $67 million order for the type that stunned the airline industry in the United States. Consolidated Vultee Aircraft Corporation in California was considered the Vicker’s primary competitor with their Convair CV-340. American Airlines suddenly launched the Douglas DC-6 in order to contest with the Viscount’s performance and speed capabilities however the Vicker’s Viscount still continued to obtain favor.