The Vickers Viscount is the world’s first turboprop airliner powered by Rolls-Royce Dart engines that can fly up to 1,200 nautical miles and has a maximum speed of 306 knots. This aircraft offered opportunities for many smaller operators in acquiring modern and versatile equipment. 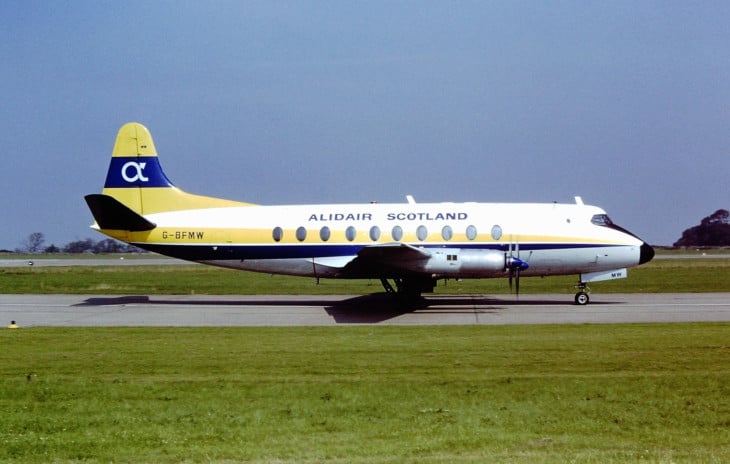 The Vickers Viscount originated in a Brabazon Committee’s Type II design. In December 1944, Rex Pierson, the chief designer at Vickers Armstrong attended a meeting of the second Brabazon Committee where they discussed on how the upcoming Viking aircraft will suit the Type II specification and Pierson’s ideas for a descendant aircraft that includes a pure jet transformation. The type II specification was divided in two categories; the Type IIA was driven by a piston engine that led to the Airspeed Ambassador, while in April 1945, they started to develop the second type which is the type IIB that was driven by a turboprop engine.

In June 1945, the initial design VC-2 or Type 453 was derived on the Vickers Viking that has four turboprop engines and fitted with twenty-four seats. In 1946, a version with a circular cross section was proposed.

On March 9 1946, contract signing of Air Ministry specification C.16/46 took place where the developing company allotted the Type 609 and named it as the Viceroy. On the same month, two prototypes began its construction at Foxwarren Experimental Department.

In August 1947, the government still selected the Rolls-Royce Dart to power the second prototype. It was designated as the Type 630 and given the name Viscount.

On July 16 1948, the prototype 630 with aircraft registration G-AHRF conducted its first flight at Wisley. It was operated by the chief pilot Joseph “Mutt” Summers. On September 15 1949, the Type 630 received its restricted Certificate of Airworthiness, then on July 27 1950, it was awarded the full certificate. On July 29, the aircraft flew its first scheduled airline flight from Northolt to Paris Le Bourget Airport carrying fourteen passengers. It has flown routes between London and Paris, and London and Edinburgh up to August 23 1950.

On March 15 1950, the second prototype designated as the Type 663 with aircraft registration VX217 took its maiden flight.

On August 28, the new prototype 700 registered as G-AMAV conducted its first flight and had been in service as a development aircraft for many years.

The Type 810 is an improved longer range of the Vickers Viscount. It has an external length of 26.11 meters, height of 8.15 meters and fuselage internal diameter of 3.5 meters. The wingspan is 28.55 meters, while the wing area is 89.5 square meters. The tailplane and elevator area is 22.11 square meters, and the fin and rudder area is 14.67 square meters. It has a wheelbase of 8.7 meters.

The Viscount Type 810 is powered by four Rolls-Royce Dart Mk turboprop engines with a maximum thrust of 1,990 horsepower each. The kerosene type engine was designed with a two stage centrifugal compressor, seven straight flow combustion chambers with ignitors, and a three stage axial turbine. The length of the engine is 2.48 meters and diameter is 960 millimeters.

The Type 630 G-AHRF was the initial variant of the airliner that was powered by Rolls-Royce Dart Mk 501 engines.

The second prototype Type 663 VX217 was a testbed for Rolls-Royce Tay turbojet engine and been utilized for powered flight controls development.

The Type 640 was a planned prototype but was not completed.

The Type 700 was the first production variant with Dart 510 engines. It can accommodate 43 passengers in flight.

The Type 800 was an improved version with extended fuselage that can accommodate 65 passengers. 67 units were built.

The Type 810 was an improved longer version built with more powerful Dart 525 engines. 84 units were built.

There were three prototypes and four hundred forty-five production aircraft built in total.