The Vickers Vanguard is a turboprop longer range descendant to the Viscount, capable of carrying higher capacity. The British airliner has a travel range of 1,590 nautical miles with maximum payload, and can fly up to 30,000 feet. 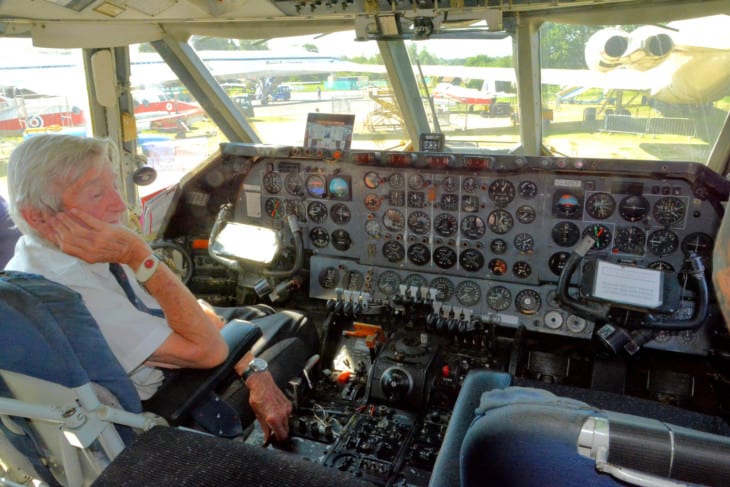 The Vickers Vanguard was designed to a British European Airways requirement for an aircraft capable of accommodating one hundred seats to succeed the well-known Viscount. The initial Type 870 design was then altered when Trans-Canada Air Lines also showed interest in the design. The existence of two involved customers let the manufacturing company to present an upgraded version Type 950 to meet both needs.

The aircraft obtained names of popular Royal Navy warships, the first was labeled Vanguard, but by the time that it was delivered, the British European Airways had already acquired its new “red square” livery.

In a period where the industry was dominated by jet aircraft, the Vickers Vanguard had a little success as a passenger airliner. There were only 44 passenger aircraft built; majority were converted to freighters.

Compared to the Viscount, the Vanguard has the half of the Viscount fuselage and then cut it off around midway up from the base, changing the upper part with a wider fuselage diameter that shows a double bubble cross-section same with the Boeing Stratocruiser design. The larger upper section has a spacious interior and has an added cargo capacity underneath the floor.

The Vanguard Type 952 has an external length of 37.45 meters and height of 10.64 meters. The stronger wing designed for higher weights has a wingspan of 35.97 meters and a wing area of 141.9 square meters. The aircraft can accommodate 139 passengers.

The Vanguard Type 952 is driven by four powerful Rolls-Royce Tyne Rty.11 Mk 512 turboprop engines. Each engine is capable of producing a maximum power of 5,545 shaft horsepower. The twin-shaft turboprop engine has a length of 2.76 meters and diameter of 1.4 meters. It has an axial six-stage LP and nine-stage HP compressor, ten cannular flame tube combustors, and three-stage LP and single-stage HP turbine.

The Vickers Vanguard had been used for cargo operations in 1966. Air Canada took out all the seats from one of their Vanguards and converted the aircraft for pure cargo operations wherein it is capable of carrying 19,050 kg of freight load. Named as the Cargoliner, it was the sole cargo conversion and remained as the last Canadian Vanguard. The aircraft retired from service in December 1972.

In 1969, the British European Airways operated nine Vickers Vanguard converted to pure-cargo configuration V953C Merchantman. The first two modification were designed and developed by Aviation Traders Limited, a war-surplus aircraft and spares trader at Southend Airport in England. The remaining modification took place at Heathrow with the use of kits from Aviation Trader Limited. Modification included a large forward cargo door with 3.5×2 meter dimension. The Merchantmen remained in operation with British Airways up to late 1979. The remaining five Merchantmen were sold.