The Vickers Windsor was a Second World War bomber aircraft developed for the Royal Air Force that did not advance past the prototype stage. Designed by Barnes Wallis and Rex Pierson, the aircraft featured the geodetic structure and was intended to replace the Vickers Wellington. 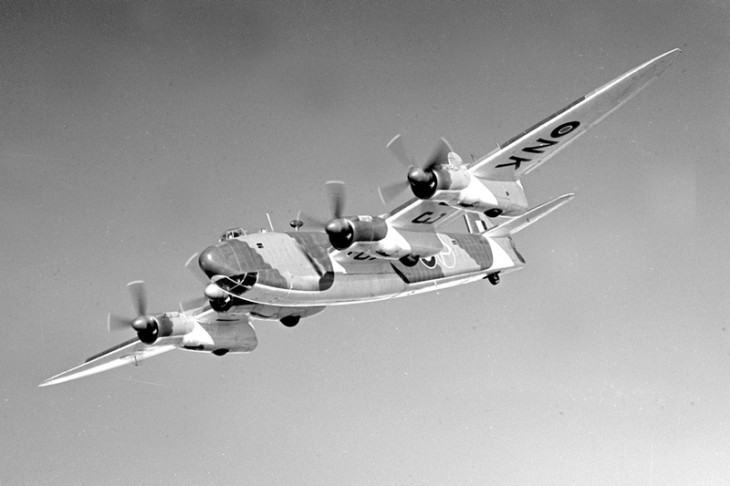 As an intended successor for the Vickers Wellington long range medium bomber, the manufacturing company Vickers Armstrong presented a sequence of designs. The first design was a high-speed twin-engined medium bomber that has remote controlled turrets in engine nacelles and guns in the nose. This was intended to have the same features as the Bristol Type 163 Buckingham and Air Ministry Specification B.11/41. The design was considered neither sufficiently fast to become a fast bomber nor adequately well-armed to become a standard medium bomber. Since the first design did not meet the set expectation, a four-engined development was drawn up in its place and the geodetic construction application used on previous Vickers large aircraft was to be utilized- a type of construction for the airframe that utilizes a space structure formed from a spirally crossing basket weave of load bearing members.

Vickers were also trying to work on Wellington bomber that has pressurized cabin intended for high altitudes and the Air Ministry authorities supported such feature on the Warwick. In addition, a new elliptical wing equipped with four Rolls-Royce Merlin engines had been proposed. The aircraft was anticipated to have a service ceiling of 43,000 feet, a maximum take off weight of approximately 25,000 kg, a 3,600 kg conventional drop bombs, and 304 knots maximum speed.

Two prototypes of the Warwick were covered by Specification B.5/41 and construction and development on the airframes that spanned up to September 1942.During the mid-1942, the Wellington successor was combined with the Specification B.3/42 program, that gave life to the Vickers Windsor Type 447, the first heavy bomber prototype capable of flying at high altitudes.

The Vickers Windsor has an external length of 23.42 meters, height of 7.01 meters, and features a pressurized crew compartment. The undercarriage has four oleo struts located in every engine nacelle in order to spread the load over the elliptical planform high aspect ratio wings. The wing has a wingspan of 35.71 meters and a wing area of 115.9 square meters. Attached in barbettes were the defensive guns that were purposely controlled by a shooter in a pressurized compartment in the extreme tail. The aircraft also features the geodetic airframe by the aeronautical engineer Barnes Wallis. This airframe had been formerly used in the Vickers Wellesley, Wellington, and Warwick aircraft. The geodetic tube from tip to tip of the wing passes through the fuselage truss. To further hold out against the compression and tension, the elements were built at sixteen degrees close to the root, relapsing to the further ninety degrees on the tips, longitudinal elements securing each thing in order. The elements’ thickness was moreover decreased into the tips.

The Vickers Windsor can accommodate up to six crew members.

On October 23 1943, the first prototype, the gun-less DW506 Type 447 testbed conducted its maiden flight. It is powered by Rolls-Royce Merlin 65 series engines that produce 1,315 horsepower each. Succeeding testing showed a sound, large aircraft with a bomber capacity but the design was beyond completed and prepared for serial production since it flew underweight with few to no mission-equipment installed.

On February 10 1944, the second prototype DW512 Type 457 made its first flight with few of its critical mission equipment installed, however the absence of a defensive gun suite was an issue. The Type 457 was fitted with Rolls-Royce Merlin 85 series engines that has a maximum thrust of 1,635 horsepower each and almost matched the planned production form compared to its antecedent. Testing of the prototype showed a ballooning effect of the special fabric skin that was initially noticed on the Type 447, so a new skin formula was brought up and tried on.

On July 11 1944, the last prototype NK136 Type 461 took into the air. It has the same Rolls-Royce Merlin 85 engine and was installed the planned armament suite of 4×20 millimeter cannons in each remote-controlled barbette located in rear of outward engine nacelles.