This fast narrow body airliner was designed to cross continents fast while being able to land and takeoff on shorter runways. It was used both as a passenger airliner and military aerial refueling tanker. 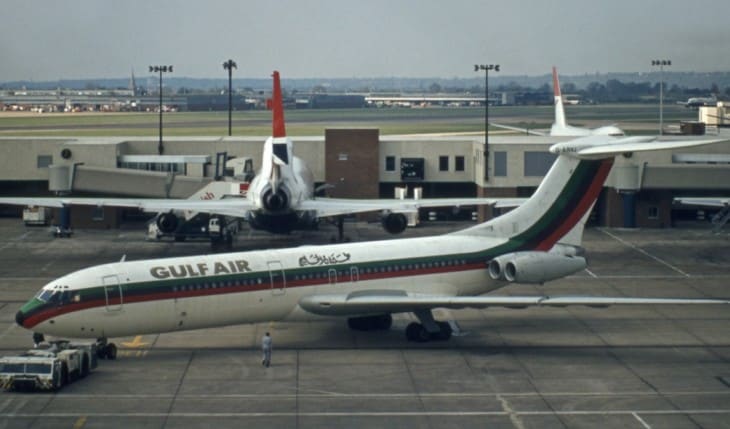 On April 15 1962, the first prototype Standard registered as G-ARTA rolled out of the factory in Brooksland.

On June 29 1962, the G-ARTA took its maiden flight by the chief test pilot G R Jock Bryce, together with his co-pilot Brian Trubshaw and flight engineer Bill Cairns. The aircraft flew from Brooksland to Wisley to be tested further. Two additional aircraft were flown towards the end of the year. However, these flight tests showed a critical drag issue that has been addressed through acquiring Kuchemann wingtips and beaver tail engine nacelle fairings, together with an upgraded rudder segment. All of these changes had lengthened the testing process.

On February 8 1964, the aircraft flew from Atlantic to Montreal, Canada. By this time, among twelve VC10 Standards, seven were completed. Production of the VC10 Supers started.

On April 23 1964, the aircraft received its Certificate of Airworthiness (COA). On April 29, it was launched to regular passenger flights from London, United Kingdom to Lagos, Nigeria. All requirements for production had been completed towards the end of the year.

The VC10 had been in service with the British Overseas Airways Corporation (BOAC) between 1960 until 1981.

On June 29 2012, the 50th anniversary of the first VC10 G-ARTA was commemorated with a VC10 Retrospective Symposium together with the official opening of the VC10 exhibition at Brooklands Museum in England.

In January 1961, Ghana Airways Limited placed an order for three aircraft. The first aircraft was delivered in 1964, followed by the second aircraft in May 1965. However, the third aircraft has been cancelled.

In October 1964, British United Airways received its order of two combination variants Type 1103. In July 1965, the airline purchased the cancelled order of the Ghana Airways, a Type 1103.

Nigeria Airways planned to purchase two VC10s, however their order had been cancelled due to financial reasons. Instead, in 1969, they decided to lease an aircraft from British Overseas Airways Corporation (BOAC).

The aircraft was introduced to several countries around the world such as Argentina, Czechoslovakia, Lebanon, Mexico, Romania and Thailand.

The VC10 has a wide wing with a wingspan of 44.55 meters and a wing area of 264.9 square meters. Its wing is fitted with wide chord fowler flaps and full span leading edge slats for better aircraft performance during take off and climb. The engines were positioned farther from the surface of runway compared to an underwing design; this is an essential factor in rough and unpaved runways, which are very frequent in Africa. The aircraft can land and take off at slower speeds and the engines were equipped to provide extra thrust that produce better hot and high performance.

The aircraft has an external length of 48.66 meters, tail height of 12 meters and fuselage diameter of 3.76 meters. It has a wheelbase of 20.09 meters and the landing gear is equipped with low-pressure tires. The cabin is 26.06 meter long, 3.5 meter wide and 2.26 meter high.

The Vickers VC10 is powered by four Rolls-Royce Conway turbofan engines that were capable of producing 22,500 lbf maximum thrust each. It has a length of 3.36 meters and a diameter of 1.10 meters.