Fairchild C-123 Provider is a transport aircraft for the American military, designed by Chase Aircraft. This was subsequently built by the Fairchild Aircraft Company for the US Air Force. In addition to the USAF services, it also went to serve most remarkably with the Coast Guard in the United States and some air forces in South East Asia. During the Vietnam War, this aircraft was utilized to spray Agent Orange. 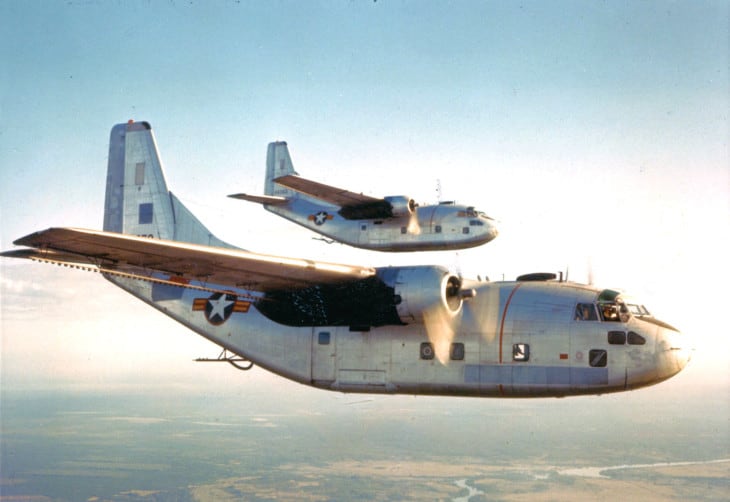 The Fairchild C-123 Provider was originally designed by Chase Aircraft as an assault glider type of aircraft for the Air Force of the United States. There are 2 powered variants of XCG-20, which were developed during the early 1950s, and these are the XC-123A and XC-123. The only discrepancy between the two variants wan the engine types being used. The XC-123A is tailored with 4 General Electric turbojets J47-GE-11 in two pods, while the XC 123 utilized 2 Whitney & Pratt R-2800 air-cooled piston type of engines.

The XC-123, which is piston-powered, was initially recognized well for a tactical transport because of reliability and ruggedness and its ability to function from short or unimproved airstrips. The XC-123A contains distinction, but only experimental, being the Air Forces of the United States’ first jet-powered transport for the military. There’s no advantage on its practical speed because of the fuselage and wing design, plus its drastic range reduction. Only one evaluation version and the turbojet-powered test was built at that time.

Fairchild C-123 Provider was noted a lot of accidents and incidents that almost killed lots of people. Last October 10, 1958, C-123B Provider with serial number 55-452 with a route to McChord, Washington from Hill, Utah, flew through numerous birds and started to crash into the hillside 6 miles east near Payette, Idaho. There were 5 Air Forces of United States flight crews, and another 14 maintenance personnel have died in the said accident. This incident was considered the worst accident in the history of the Thunderbirds team.

Another notable incident that was happened involving C-123 was recorded on December 11, 1965. This had a route to the Air Base of Tuy Hoa. The UAF C-123 Provider hit several trees on top of its ridge, which causes it to crash accidentally. The 4 crews of the aircraft plus the 81 passengers died in this tragic accident. On October 16, 1980, the UC-123K of Ohio Air national Guard was crashed after its takeoff. Its route was from Fort Sill, Oklahoma, to the Rickenbacker, Ohio. Five of the crew members died because of the impact.

Most of the survivors of the Fairchild C-123 Provider can be found in museums in different countries. The Air America Foundation, Incorporated owned C-123K with serial number 54-674 and was located at the Space Coast Regional Airport in Florida. In Air Heritage Museum at beaver falls, Pennsylvania, you can see the C-123K – “ThunderPig.” This is operational and only good for some air shows. Another one, Benito Ebuen AFB, can be found in Mactan Island, Philippines. These are just some of the survivors of C-123 Provider and its actual locations. You may still know some other museums and places where you can find this C-123.