The Fairchild 22 was developed by the Kreider-Reisner division of the Fairchild Aircraft Corporation in Hagerstown, Maryland. This tandem seating sport plane has a parasol wing, which is believed to be a rare plane design. It is also renowned as one of the first successful light biplanes that were manufactured in quantity. 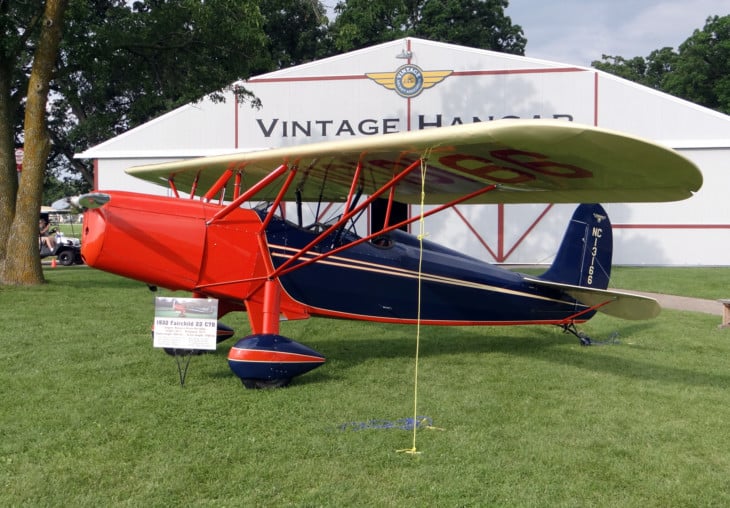 Advertised as the Fairchild 22, this plane was certified in March 1931. Having a mixed-construction, Fairchild 22 has a parasol-wing with a firmed tailwheel landing apparatus and a fixed tail unit. Its two-tandem cockpits were powered by a 60 kW or 80 hp radial engine and were fitted with both radial and inline piston engines. After testing the prototype engine, its first production was re-engined with a 56 kW or 75hp inverted inline engine.

The Fairchild 22 production struggled, however, until the end of the Depression, having an initial market to boost targeted customers through providing a higher performance aircraft.

In the early 22’s, Fairchild was built with inline engines, and the subsequent plane had a dainty appearance and a small frontal profile. In 1934, this aircraft was altered to use a Warner radial engine. A cowling was also mounted, and fairings were installed around strut junctions to minimize drag.

The Fairchild 22’s engine is reputed to be of mediocre reliability – a span of only a limited hundred hours between refurbishment. There are few aircraft left in the nation that works on 145hp Warners. It is because some of its parts are quite difficult to find. In fact, some who usually worked on these aircraft engines are dying off.

Fairchild 22 has a maximum speed of 133 mph or 214 kilometers per hour. It also has a range of 350 miles and a service ceiling of 20,000 feet. It has several models and is distinguished based on the type of its installed engine. The typical examples of these are C7- Rover 75hp 4 cylinders with the inverted inline engine, C7F-Warner Super Scarab 145hp cylinder with radial engine. The prototype of the latest model C-7 was originally powered by the 80hp Armstrong Siddeley Genet engine. Then, it was replaced by the inline engine 75 hp with a more sleek tail group. Other models are C7A, C7B, C7D, C7E, and C7G.

Fairchild 22 has a wide gear stance. Its wheels are usually for the time with cable-driven drum brakes. Also, it has the full span ailerons that are often used on all types of Fairchild 22 models. This aileron helps in simplifying the aircraft’s control rigging.

This aircraft, however, doesn’t have a pushrod or cable within its wing. The wing is two-piece and commonly supported by several struts. It also has two main flying wires connected to the fuselage configuration.

Fairchild 22 is not able to have an array of breaking up in flight when operated for hardcore aerobatics. Some of the flying planes were built from a few pieces of bent metal and from a data plate.

This aircraft was braced in the final C7G model, which is known to have a ten positive Gs certificate stress limits and perfectly ideal for aerobatics show planes.