Fairchild AT-21 Gunner was an American specialized bomber trainer for American crews. This was designed to train crews to successfully utilize gun or power gun turrets on flexible amounts. The AT-21 was also designed to teach the crews the different procedures and proper procedures to follow to function as crew members. This aircraft had five crews – the pilot, gunnery instructor, or the co-pilot, and three pupils. 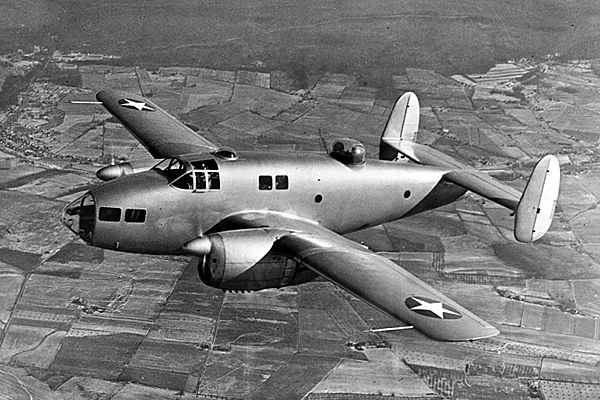 The USAAP or the United States Army Air Forces laid out some specifications for this specialized bomber trainer, which orders two prototypes from the Fairchild Aircraft. XAT-13 that is powered by two 450 horsepower emerged as a scaled-down bomber using a machine gun on a glazed nose and top turret containing two machine guns.

This was also fitted with the landing gear. The idea was to provide a type that was able to produce a spare on the positions of the bomber crew from piloting, bomb-dropping/aiming, or navigation to aerial gunnery.

A second prototype, which was designated as XAT-14, is similar on a layout; however, this was powered up by two 520 horsepower Ranger V-770 inverted inline 12-cylinder engines. With a continuous refinement to properly match the aircraft for the bombardier training, a new designation was created. And that was the XAT-14A.

These prototypes featured extraordinary construction built from the Duramold plywood that is plastic bonded. During the last phase of the testing period, USAAC commanded its inline version as AT-21 Gunner, which was specialized for the gunnery training.

The company of the Fairchild Aircraft created one type of aircraft in Hagerstown plus 106 aircraft at their plants in Burlington, North Carolina, in 1943-1944. On the other hand, Bellanca Aircraft produced models in New Castle, Delaware, while McDonnell created around 30 aircraft at their plants in St. Louis. These companies are enlisted to maximize production speed and delivery to the training units.

In October 1942, United States Army Air Forces commanded 2 XBQ-3 aerial torpedoes, which are based on the design of the AT-21. These were carried out for flight testing that is capable of carrying around 4,000 lbs. or 1,800 kg of explosives. The initial flight of the XBQ-3 was in July 1944; however, the project was then canceled after a year.

The Fairchild At-21 Gunner had different variants. Some of these are: XAT-13, which is a twin-engine trainer for bomber crew powered up by two 450 horsepower; XAT-14 was the At-13 variant containing two 520 horsepower Ranger V-770-6 type of engines and converted to the XAt-14A (serial number 41-19503), XAT-14A was a modification that serves as bombardier trainer containing removed nose gun and dorsal turret, AT-21 was a production version of XAt-14A that contains two 520 horsepower Ranger V-770-11 or 770-15 engines, and the XBQ-3 which was AT-21 modification containing 4,000 lbs. explosives that are charged in the fuselage.