Fairchild C-119 Flying Boxcar is a type of transport aircraft used by the American military which was developed during World War II. This was designed for carrying cargo, patients, personnel, and even mechanized equipment. This aircraft was also used to drop troops and cargo by using a parachute. 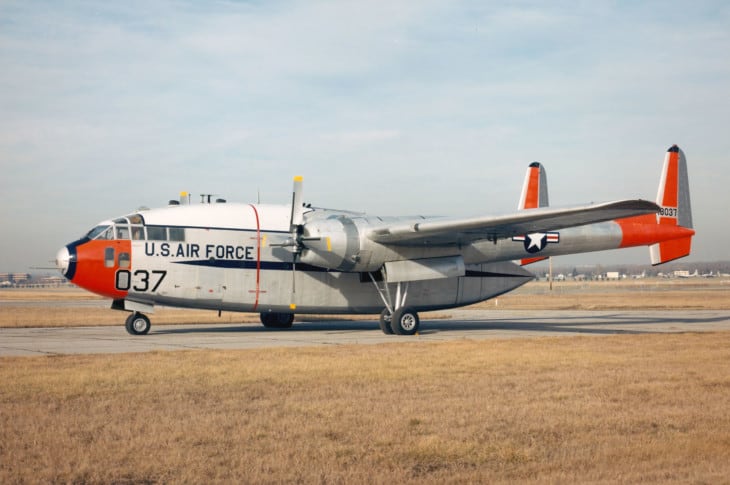 The first Fairchild C-119 made an initial flight last November 1947. Then, there are several C-119 models that were produced after a few years. Its nickname, Flying Boxcar, was earned because of its unusual appearance and its ability for cargo-hauling.

The navy R4Q and Air Force C-119 were initially an innovative design of the early Fairchild C-82 packet, which was built from 1945 to 1948. This packet provided services to the Military Air Transport Service and Tactical Air Command of the Air Force for almost 9 years. The design was eventually found to have some serious issues. All these things were addressed in C-119.

As opposed to the C-82, the cockpit was stirred forward to flush with nose than its location before over the compartment cargo. Then, it resulted to more usable space of cargo and bigger loads compared to the C-82 could even accommodate. C-119 Flying Boxcar features a powerful engine and a stronger and wider airframe. Its first prototype, known as XC-82B, first blew last November 1947, which contain deliveries of the C-199Bs from the factory of Fairchild’s Hagerstown, Maryland, started on December 1942.

Some of the prominent accidents and incidents of the Fairchild C-119 Flying Boxcar were recorded in history. The flight, Gamble Chalk One with serial number 51-2560, flew off its course and crashed at Mt. Silverthrone, Columbia. This brought around 19 casualties last November 7, 1952. Another incident was documented last November 15, 1952. It was called Warmwind Three with a serial number of 51-2570. This flight flew off its course, and the aircraft was lost. In this accident, there were 20 pronounced casualties.

On June 23, 1953, after the ground control moves toward the radar watched takeoff from Ashiya, Japan, US Air Force C_119 with serial number 49-161 turned to head 005-degree magnetic. It started an ordinary climb through its overcast. The pilot reported that the Flying Boxcar might have scraped its tail skid during takeoff.

In addition to that, the left seat gyroscopic instruments didn’t function well. After a few seconds, the pilot had made an immediate request GCA vector to Ashiya, Japan, in which the pilot said that his co-pilot would need to fly a GCA approach from its right seat. Even though the GCA was nonstop tracking them, it was then reported that C-119 with serial number 49-161 already disappeared from the radar. Furthermore, all people on board were unfortunately lost.