The Fairchild AC-119G and AC-199K Stinger were renowned as the twin-engine piston power-driven built by the US during the Vietnam War. These aircraft substituted the Douglas AC-47 Spooky and functioned alongside the initial AC-130 Spectre gunship version. 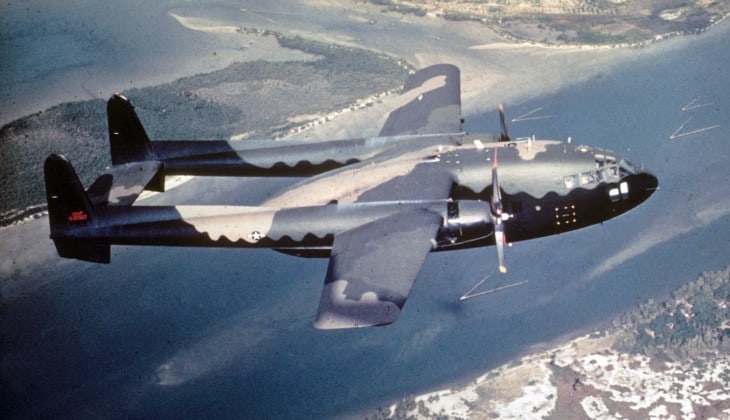 The Fairchild AC-119 became outward to US war-aircrafts that low-flying, slow-moving, drifting planes are rising extensive war loads. It played a huge part in combating a drawn-out conflict in Southeast Asia. This side-firing aircraft was built, normally from converting existing prop-driven, firmed-wing military carriages to the role.

The Fairchild AC-119 could remain on its station and able to supply considerable firepower against the preferred targets if properly outfitted and armed with sensors and pertinent equipment. In addition, its converted model was excelled and utilized in the Close-Air Support, or simply called CAS.

The Fairchild AC-119 was taken into service to thrive an aged model of a converted of C-47 transports. It was equipped with 4×7.62mm miniguns and armoring the critical areas of the airframe. K-models were also known for their lengthened armament collection.

Every aircraft supported 60xMk 24 blazes fired from an LAU-74A launcher series. Though it is quite identical in many areas, Fairchild AC-119 Shadows was often run in the CAS role. The Fairchild AC-119 Stingers, on the other hand, were deployed for “Search-and-Destroy” forays. Regardless of the model, Fairchild AC-119 is perfect for targeting enemy fleets.

Service entry started during November 1986, and working squadrons were part of the 56th Special Operations and 14th Special Operations Wing in Thailand. They are all aiding under the name of the US Air Force’s Tactical Air Command service. Also, the control of 16 AC-119K models was prearranged to the South Vietnamese Air Force in 1972.

In 1969, an engine failure caused the aircraft to put on fire a few seconds after its takeoff. The pilot lost his control, resulting in a huge explosion. Out of ten occupants, six of them were killed. During that time, they were carrying a load of bombs.
In 1970, the Fairchild AC-119 gunship grieved a runaway prop after its takeoff. After failing to control the aircraft, the pilot was forced to head out to sea. Unfortunately, one crew member was not rescued.