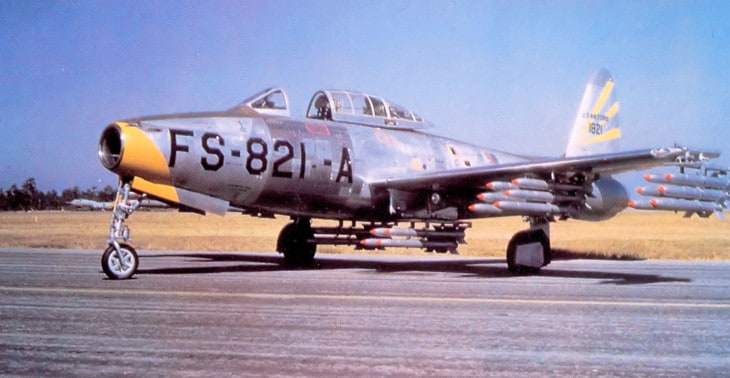 On September 11, 1944, a General Operational Requirement from the United States Army Air Force was released for a day fighter capable of flying on a top speed of 521 knots, with a combat range of 612 nautical miles, could be loaded with either six 12.7 mm or 15.2 mm machine guns, and powered by a single Allison J35 engine.

On November 11 of the same year, the manufacturing company Republic Aviation received three prototypes order. The prototype was designated as XP-84. On February 28, 1946, it took to the air for the first time piloted by Major Wallace A. “Wally” Lien. In November 1947, the aircraft entered into service. It was produced in several versions with a total number of 7,524 Thunderjets built.

The aircraft is powered by a single Allison J35-A-29 engine. It is an afterburning turbojet with an eleven-stage axial compressor, eight tubular inter-connected combustion chambers, a single-stage axial turbine, and a dry-sump pressure system with spur gear pressure and scavenge pumps. The engine produces a maximum thrust of 5,560 lbf.