The Mitsubishi A6M Zero was formerly produced by Mitsubishi Aircraft Company as a long-range fighter aircraft during the 1940s. It first flew in April 1939 and was introduced in July 1940. It was in service with the Imperial Japanese Navy Air Service from 1940 until 1945. A total number of 10,939 aircraft were built. 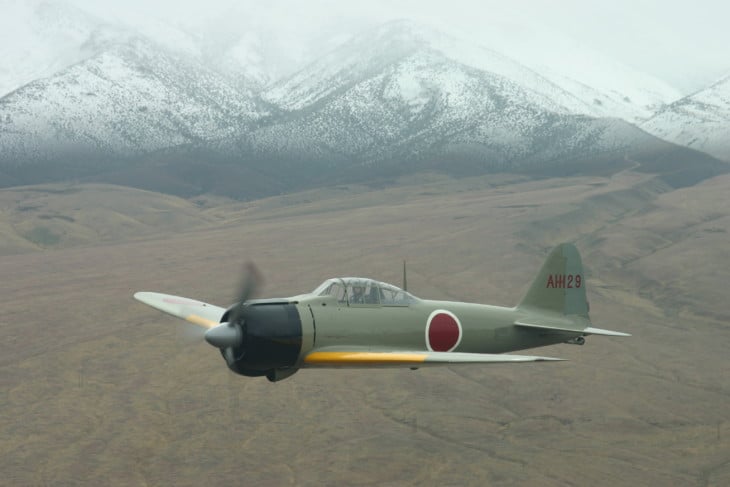 The Mitsubishi A6M Zero is expressed to have been the most efficient carrier-capable Japanese fighter aircraft during the early Second World War. It combined outstanding maneuverability and ultra-long-range capabilities and was commonly used as a land-based fighter of the Imperial Japanese Navy Air Service. The aircraft was produced in different variants from 1939 to 1945.

The A6M2 Type O Model 21 was the most produced variant of the A6M during the Second World War. It is a single-seat fighter with an external length of 9.06 meters, an external height of 2.98 meters, and a fuselage diameter of 1.1 meters. The tail height is 3.05 meters and the wheelbase is 6.75 meters. It has a wingspan of 12 meters and a wing area of 22.42 square meters. The gross weight is 2,796 kg, the internal fuel capacity is 137 US gal and the drop tank fuel is 87 US gal.

The aircraft is powered by a single Nakajima NK1C Sakae-12 engine. It is a fourteen-cylinder air-cooled two-row radial engine with an overhead-valve, a gear-driven two-speed supercharger, an automatic mixture and boost control fuel system and an air-cooling system. It produces a maximum takeoff thrust of 940 hp and 950 hp at 13,800 feet and drives a three-bladed Sumitomo-Hamilton constant-speed propeller.

The A6M Zero has a maximum speed of 288 knots at 14,930 feet, a cruise speed of 180 knots and a never exceed speed of 180 knots. The standard range is 1,10 nautical miles and the ferry range is 1,67t5 nautical miles. It can fly up to 33,000 feet and can climb at a rate of 3,090 feet per minute. The aircraft could be loaded with two 7.7 mm Type 97 fixed-light aircraft machine guns located in the engine cowling with five hundred rounds per gun and two 20 mm Type 99-1 Mk.3 cannon located in the wings with sixty rounds per gun. It was also loaded with two 60 kg of bombs and a single 250 kg of bomb for kamikaze attacks.