The Republic F-84F Thunderstreak was designed and manufactured by Republic Aviation as a swept-wing turbojet fighter bomber in the United States. It first flew in June 1950 and entered service in May 1954. The aircraft served with the United States Air Force, as well as other air forces in Belgium, Germany, and the Netherlands. A total of 3,428 aircraft were built. 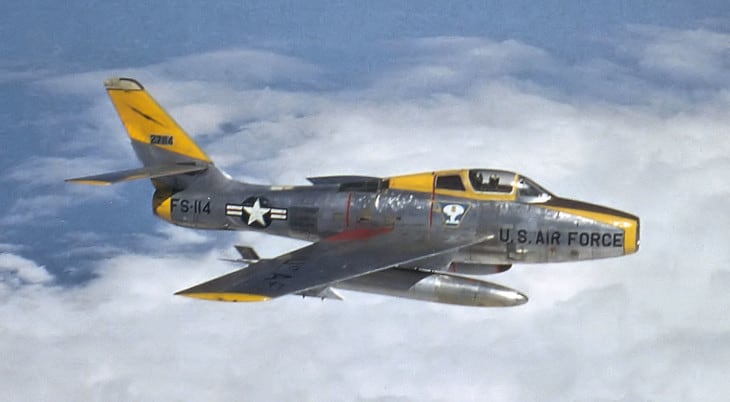 Development of the F-84F began in 1948 when the manufacturing company Republic Aviation designed a swept-wing variant of the F-84 intended to compete with the performance of the F-86 Sabre. The aircraft prototype was given the designation XF-96A and took to the air for the first time on June 3, 1950, piloted by Otto P. Haas. In July 1950, the aircraft was designated as F-84F Thunderstreak and was ordered into production.

The aircraft is powered by a single Wright J65-W-3 engine. It is an axial-flow turbojet with a thirteen-stage axial compressor, annular combustors, and a two-stage axial turbine. It produces a maximum takeoff thrust of 7,220 lbf. The F-84F has a maximum speed of 604 knots at sea level and a combat range of 704 nautical miles with two drop tanks. It can fly up to 46,000 feet and can climb at a rate of 8,200 feet per minute.

The Thunderstreak could be armed with six 12.7 mm Browning M3 machine guns; four mounted in the nose over intake and two mounted in the wing roots, with 1,800 rounds in total. It is also armed with up to 2,727 kg of rockets and bombs including one Mark 7 nuclear bomb. The aircraft was fitted with A-1CM or A-4 gunsight with APG-30 or MK-18 ranging radar and includes several communications equipment such as AN/ARC-33 or 34 command set radio and AN/APX-6 or 6A instrument friend or foe set.