While almost every American has heard of the Blue Angels, the Thunderbirds are less known. In fact, people of certain ages are more likely to recognize the animated series “Thunderbirds” or “Thunderbirds Are Go.” Here’s everything you should know about the Air Force’s top pilots.

Airshows had become incredibly popular after World War II. The aerobatic stunts were often performed by veteran pilots. Due to the popularity of aviation at the time, the Armed Forces saw an opportunity to attract the public’s interest.

The Thunderbirds and the Blue Angels use aerial demonstrations to amaze the audience and promote patriotism. Both squadrons fly in similar formations and perform similar maneuvers. You can also catch them at air shows throughout the United States.

Due to the similarities between the Thunderbirds and the Blue Angels, it’s easy to confuse them for each other. However, there are key differences. They belong to different branches of the Armed Forces, fly different planes, and have different schedules.

Who Are the Thunderbirds?

The Thunderbirds are members of the United States Air Force (USAF) Air Demonstration Squadron. The squadron is part of the 57th Wing of the USAF.

The Thunderbirds squadron was formed in 1953, making it the third-oldest flying aerobatic team after the French Air Force’s air demonstration team and the US Navy’s Blue Angels.

The USAF is the youngest of the US Armed Forces. It was established as a separate service in 1947, shortly after World War II. Six years later, the USAF formed their official air demonstration team.

The team was designated the 3600th Air Demonstration Unit and nicknamed the “Thunderbirds.”

The unit was based at Luke Air Force Base in Arizona, which is a region with strong Native American traditions. In the cultures of certain Native American tribes, the thunderbird is a supernatural creature with tremendous strength and power.

The objectives of the squadron are to support recruiting and retention programs for the Air Force and strengthen morale and public confidence. The team also participates in community outreach activities to improve public relations.

Over the years, more than 280 million people throughout the United States and 57 other countries have watched the Thunderbirds.

What Do the Thunderbirds Do?

Before takeoff, the team leader says, “Thunderbirds, let’s run them up!” The command is broadcast through loudspeakers for the crowd to hear. The first four planes then take off one at a time to create the initial diamond formation.

The fifth plane performs a low altitude roll, which is then followed by the sixth plane performing a half-roll maneuver called the “Split S.” The remaining demonstration consists of various aerial formations and solo maneuvers.

During the Arrowhead formation, the planes are just 18 inches from each other. They also travel at speeds up to 500 mph, which is just under the speed of sound.

The air demonstrations are performed throughout the United States and occasionally abroad. The Thunderbirds perform at up to 88 airshows each year.

The demonstrations typically last about an hour and 15 minutes. During the demonstration, the team performs about 30 different maneuvers. Due to the complexity of the maneuvers, airmen need frequent training.

The team trains throughout the off-season, which lasts from December to February. The airshow season starts in March and lasts through November.

What Planes Do the Thunderbirds Fly?

The squadron switched to the F-16 after a devastating accident that occurred in 1982 when four members of the team were killed. The F-16 was superior to the T-38 Talon that they previously flew.

The team flew F-16As, which they continued to fly until 1991 when they switched to the F-16C. The team also has two F-16D twin-seat trainers that are occasionally used for private flights with VIPs or reporters.

The original F-16 was developed by General Dynamics and Lockheed Martin. Compared to earlier fighter jets, the F-16 had many innovative design features to improve its capabilities in combat.

The new jet had a frameless bubble canopy that provided increased visibility. It also had a side-mounted control stick for greater maneuverability.

Where Are the Thunderbirds Based?

The Thunderbirds are based at Nellis Air Force Base in Nevada and part of the 57th Wing of the USAF. The 57th Wing is devoted to advanced air combat training.

Pilots receive training with every type of aircraft in the Air Force. They also train with air and ground units from all major branches of the US Armed Forces, including the Army, Navy, and Marine Corps.

Along with the Air Demonstration Squadron, the 57th Wing includes six squadrons that form the 57th Operations Group. The Wing also houses the USAF Weapons School, which includes 16 squadrons. The 57th Maintenance Group includes over 2,200 Airmen, contractors, and civilians in three squadrons.

While the Thunderbirds are based at Nellis Air Force Base, they travel the country to perform air demonstrations.

How Many Thunderbirds Are There?

Of the eight pilots, only six participate in the demonstrations each season. The two remaining pilots are trainees.

Personnel who volunteer for the Thunderbirds serve three-year or four-year assignments. Officers serve two-year assignments. Each season, about half of the team requires replacements, which leads to constant training throughout the winter months.

How Many Thunderbirds Have Died?

The first death of a Thunderbirds pilot occurred in 1972. Major Joe Howard died in a crash at an airshow in Virginia after his plane suffered structural failure.

The worst disaster in the history of the Thunderbirds was also the last accident that resulted in a fatality. In 1982, four Thunderbirds pilots died during a training run.

The pilots were practicing maneuvers at Indian Springs Air Force Auxiliary Field in Nevada. They were flying Northrop T-38 Talon jets while attempting a loop in a side-by-side formation.

The maneuver required the planes to descend at speeds faster than 400 mph and level off at 100 feet above the ground. Tragically, all four planes struck the ground and the pilots died instantly.

Since 1982, no Thunderbirds have died. However, there have been several accidents that have resulted in injuries and the loss of planes.

How to Fly with the Thunderbirds

The squadron has an F-16D Block 52 jet with two seats. A pilot may take a civilian into the air and perform several maneuvers, but these rides are typically separate from scheduled airshows.

Where Can I Buy Thunderbirds Toys?

Thunderbirds toys and collectibles are available from toy retailers and online marketplaces. The most common toys associated with the Thunderbirds include model replicas of the F-16 Fighting Falcons that the pilots fly in real life.

What Formations Do the Thunderbirds Fly?

The Thunderbirds have eight formations that they fly during aerial demonstrations, along with solo flights. The eight formations include the Diamond, Delta, Stinger, Arrowhead, Line-Abreast, Trail, Echelon, and Five Card formations.

The diamond formation is one of the most common formations for aerial demonstrations. It is also performed by the Blue Angels and other aerobatic squadrons. It involves four planes flying in tight formation in a diamond shape.

One Thunderbird flies at the front of the formation. The next two planes follow behind, slightly to the right and left. The fourth plane completes the diamond formation while remaining inline with the first plane. The diamond formation was first achieved in 1958 by the Pakistan Air Force.

The delta is the last formation of the aerial demonstration and involves all six jets. This formation is in the shape of the letter “V.” The formation resembles the diamond formation with jets flanking each side.

The arrowhead formation requires four jets. With this formation, two jets follow each other closely while two additional jets flank the rear jet.

The line-abreast, trail, and echelon formations require the jets to fly in a line. Depending on the formation, they may fly side-by-side, in a row, or staggered.

The five-card formation requires five jets. One of the jets flies in the middle of the formation and is surrounded by the four other jets at equal distances.

Along with these eight formations, the Thunderbirds have two jets that fly solo. The solo jets perform maneuvers to show off the full capabilities of the jets. They perform fast rolls, slow rolls, loops, and tight turns.

The showstopper is the “Bomb Burst,” which is a special maneuver used near the end of the performance. It starts with four jets in the diamond formation.

The planes pull up and fly vertically into the sky, eventually breaking off in separate directions as a solo jet flies through the middle while performing rolls.

How Close Do the Thunderbirds Fly?

When performing the Arrowhead formation, the fuselage of the first plane is just 18 inches from the canopy of the next plane. Many of the other maneuvers also require the pilots to fly incredibly close to each other, often within just a few feet.

The speed of the planes creates a wind cushion that envelopes the exterior of the jet. This cushion acts as a buffer to help pilots maintain formation and avoid touching wings. If a jet starts to drift too close to another jet, both pilots should feel the force of the other jet.

How Fast Do the Thunderbirds Fly?

During aerial demonstrations, the Thunderbirds may reach speeds of 500 mph or faster. However, the average speed for most maneuvers is closer to 400 mph.

The fastest speeds occur during flat passes. During a flat pass, the jets achieve a tight formation and then fly in a straight path above the crowd. The pilots must stay 500 feet from the crowd and 200 feet above the ground.

Is There a Thunderbirds Museum?

The Thunderbirds Museum is at Nellis Air Force Base in Nevada. The museum is open between 9 am and 3 pm on Monday through Friday for those with access to the base. It contains a wide range of artifacts from the history of the Thunderbirds, including old flight jackets and several old jets.

There are two ways for civilians to gain access to the base. They may travel with a scheduled tour group or receive sponsorship from an active service member stationed at the base.

How Do You Become a Thunderbird Pilot?

Over the years, 325 pilots have flown with the Thunderbirds. To become a Thunderbird pilot, candidates need to be members of the United States Air Force (USAF). The squadron only accepts experienced pilots with years of service.

Candidates may apply for a slot on the team, but the selection process is competitive. Pilots typically need to submit comprehensive records and letters of recommendation. All candidates are interviewed and evaluated by team members. The selection is reduced through screenings and additional interviews. 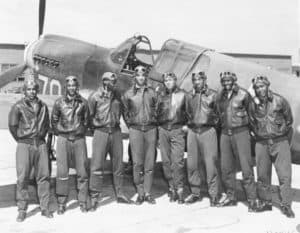 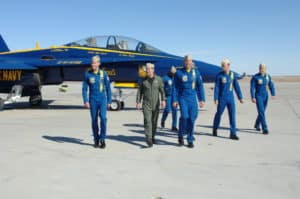 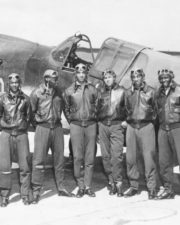 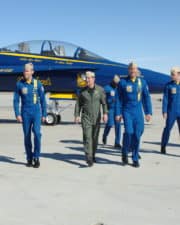