The Republic F-105 Thunderchief was manufactured by Republic Aviation as a supersonic fighter-bomber operated by the United States Air Force. With the ability to reach Mach 2 speed, the aircraft ushered most of the strike bombing missions in the early Vietnam War. It first flew in October 1955, was introduced in May 1958, and was retired in February 1984. The F-105 was produced from 1955 to 1964 with a total number of 833 aircraft built. 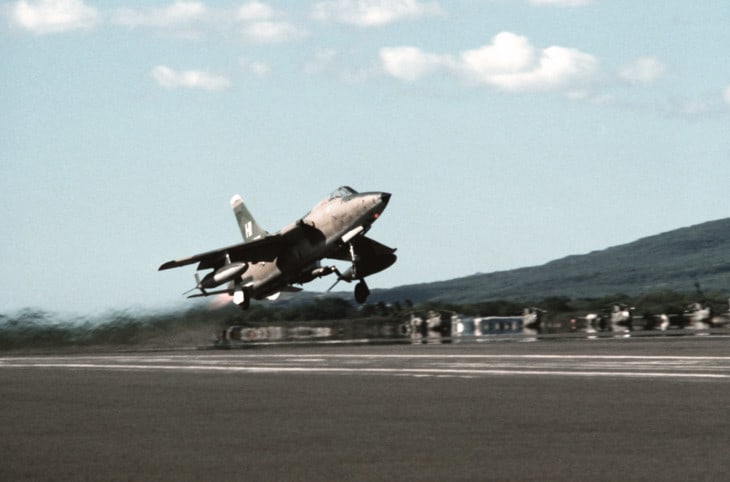 The F-105D was a definitive production version with an all-weather capability due to its improved avionics systems, such as the NASARR R-14A all-purpose monopulse radar, AN/ASG-19 Thunderstick fire control system, and AN/ARN-85 long-range navigation system. The aircraft has an external length of 19.62 meters, an external height of 3.55 meters, and a fuselage diameter of 1.3 meters. It has a tail height of 6 meters and a wheelbase of 6.3 meters. It was a mid-wing monoplane with a wingspan of 10.65 meters and a wing area of 35.8 square meters. The wing is swept at an angle of 45 degrees.

The F-105 can be loaded with various armaments such as a single 20 mm M61A1 Vulcan six-barreled Gatling cannon with 1,028 rounds. It is equipped with five total hardpoints; four located under the wing, one in the centerline pylon stations plus an internal bomb bay with a capacity of up to  6,400 kg of ordnance, with provisions to carry combinations of LAU-32/LAU-59 rocket pods with seven Folding-fin Aerial Rockets each, AIM-9 Sidewinder air-to-air missiles, AGM-12 Bullpup air-to-surface missiles, and AGM-45 Shrike anti-radiation missiles. The aircraft is also armed with M117 and Mark 80 series of general-purpose bombs, M118 demolition bombs, nuclear weapons, and cluster munitions.