The Tupolev Tu-124 was designed by Tupolev as a short-range twinjet airliner that could carry fifty-six passengers in flight. It was manufactured in the Soviet Union and performed its maiden flight in March 1960. Introduced in October 1962, the aircraft was developed from the Tupolev Tu-104 medium-range airliner. It was produced from 1960 until 1965 with a total number of 165 units built. It was retired with Aeroflot in 1980, with Iraqi Airways in 1990, and with military service in 1992. 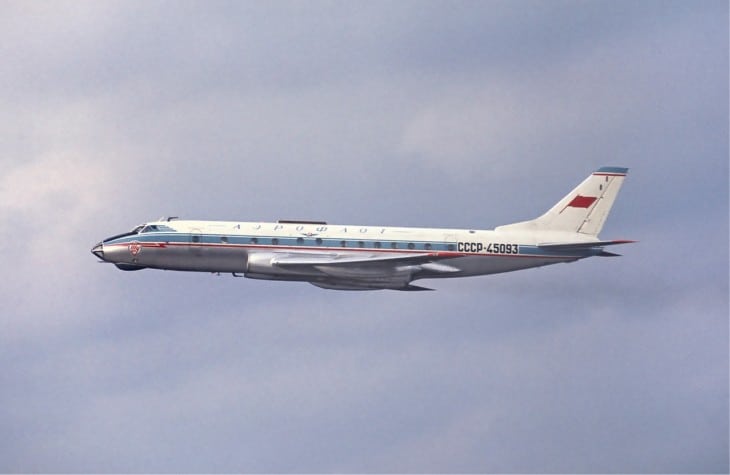 The Tupolev Tu-124 was developed as a response to the requirement of Aeroflot for a regional airliner that would take over the Ilyushin II-14 on domestic flights. Derived from the Tu-104 twin jet medium-range narrow-body airliner, the Tu-124 resembled a seventy-five percent of its predecessor with several improvements such as double-slotted flaps for better performance, as well as a large center-section airbrake and automatic spoilers that increased drag and reduced lift. It was introduced on October 2, 1962, and was built from 1960 until 1965. The aircraft was operated by Aeroflot, Iraqi Airways, and were also sold to a few military operators such as the Soviet Air Force and the Chinese Air Force.

The aircraft is powered by a twin Soloviev D-20P engines rated at 11,900 lbf thrust each. It is a twin-spool low-bypass turbofan engine with a three-stage LP eight-stage HP axial flow compressor, cannular combustors with twelve flame tubes, a two-stage LP single-stage HP turbine, and a pressure spray oil system. The Tu-124 has a maximum speed of 520 knots and a cruise speed of 430 to 470 knots. It has a travel range of 1,100 nautical miles with maximum fuel and 3,000 kg of payload. The aircraft can fly up to 38,400 feet and can climb at a rate of 2,400 feet per minute.