The Tupolev Tu-104 was a Soviet airliner produced by Tupolev from 1956 to 1960. It was a medium-range twin-engine turbojet-powered aircraft and the sole jet airliner that operated from 1956 until 1958 in the world. The aircraft was developed from the Tupolev Tu-16 and was introduced on September 15, 1956, with Aeroflot. It was retired in 1981 and had a total number of 201 aircraft built. 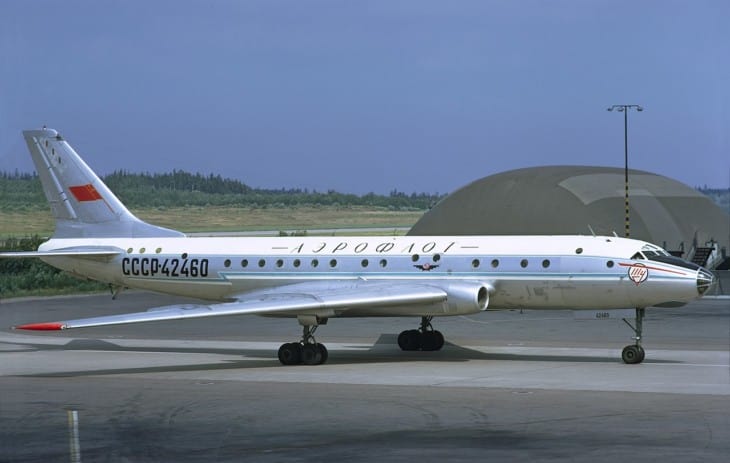 The Tupolev Tu-104 was developed as a response to the need of Aeroflot for a modern airliner with improved capacity and better performance compared to the piston-engined aircraft that were existing then. The new Tu-104 was derived from the Tu-16 Badger twin-engine jet bomber with few improvements. The Tu-104 had several variants produced.

The Tupolev Tu-104B version had various modifications and has a lengthened fuselage of 40.06 meters, with an external height of 6 meters and a fuselage diameter of 3.4 meters. The aircraft can accommodate seven crew members and fifty to one hundred and fifteen passengers on board. It has a wingspan of 34.54 meters and a wing area of 183 square meters minus the leading-edge extension. The tail height is 11.9 meters and the wheelbase is 15.1 meters. On April 15, 1959, the aircraft started its revenue service with Aeroflot flying from Moscow to Saint Petersburg.

The aircraft has an empty weight of 43,800 kg, a gross weight of 78,100 kg, and a maximum payload of 12,000 kg. The normal fuel capacity is 21,000 kg while the maximum is 26,500 kg. The Tu-104B is powered by two Mikulin AM-3M-500 engines. It is a turbojet engine with an axial-flow single-stage LP eight-stage HP compressor, fourteen can combustion chambers, and an axial-flow two-stage turbine. Each engine produces a maximum thrust of 21,400 lbf.