The Supermarine Scimitar was built by the British aircraft manufacturer Supermarine as a naval strike fighter during the mid-1950s. It was intended for the Royal Navy Fleet Air Arm and first flew in January 1956. The aircraft was introduced and delivered in 1957 and was retired in 1969. It was in service with the Royal Navy from 1958 to 1969 before being replaced by the Blackburn Buccaneer. A total number of seventy-six aircraft were built. 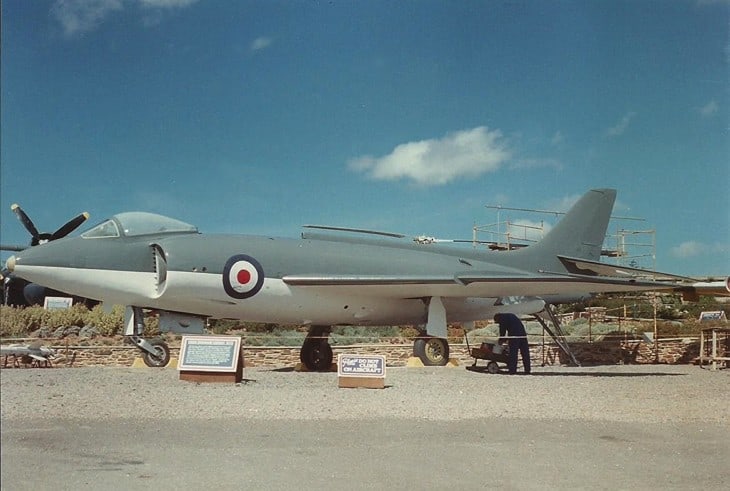 The Supermarine Scimitar was developed from numerous naval jet aircraft designs of the manufacturing company, originally to a specification for a fighter aircraft without an undercarriage that can land on flexible sprung flight decks, that would have a lighter and less-complicated structure. On January 19, 1956, the first of the prototype designated as Type 544 took to the air for the first time. On January 11, 1957, the first production aircraft performed its maiden flight. The aircraft was mainly used by the Royal Navy and has a total number of seventy-six Scimitars built.

The aircraft is powered by twin Rolls-Royce Avon 202 turbojet engines. It is a combination of a fifteen-stage axial compressor with a combustion system and a two-stage axial flow turbine. Each engine produces a maximum takeoff thrust of 11,250 lbf. The Scimitar has a maximum speed of 640 knots at sea level and a travel range of 1,237 nautical miles. It can fly up to 46,000 feet and can climb at a rate of 6,751 feet per minute. It is loaded with four 30 mm ADEN cannons with 160 rounds per gun and four hardpoints with provisions to carry four 454 kg of bombs or four AGM-12 Bullpup air-to-ground missiles or AIM-9 Sidewinder air-to-air missiles. It could also carry up to sixteen 2 or 3-inch unguided rockets (four each pylon) and a single Red Beard freefall nuclear bomb.