The Blackburn Buccaneer was initially developed and manufactured by Blackburn Aircraft as a British carrier-capable strike aircraft during the 1950s intended for the Royal Navy. The aircraft was officially named the Hawker Siddeley Buccaneer when Blackburn was absorbed by the Hawker Siddeley Group. The Buccaneer first flew in April 1958 and was introduced in July 1962. It was retired in March 1994 and has a total of 211 aircraft built. 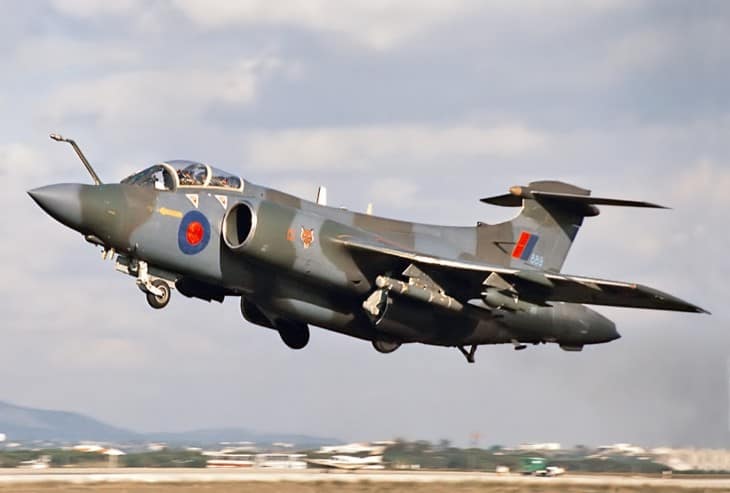 The Buccaneer S.2 was derived from the S.1 with several modifications and fitted with more powerful engines. It can carry two crew members and has an external length of 19.33 meters, an external height of 3.2 meters, and a fuselage diameter of 1.4 meters. It has a tail height of 4.95 meters and a wheelbase of 6 meters. The wingspan is 13 meters and the wing area is 47.8 square meters. It has an empty weight of 13,608 kg, a gross weight of 28,123 kg, a maximum payload of 7,500 kg, and a fuel tank capacity of 1,871 US gal.

The aircraft is powered by two Rolls-Royce Spey Mk.101 engines. It is a low-bypass turbofan with an axial-flow five-stage LP twelve-stage HP compressor, ten can-annular combustion chambers, and a two-stage LP two-stage HP turbine. Each engine produces a maximum takeoff thrust of 11,000 lbf. The Buccaneer has a maximum speed of 580 knots at 200 feet and a travel range of 2,000 nautical miles. It has a service ceiling of up to 40,000 feet.

The Buccaneer is equipped with four hardpoints located under the wing that carry up to 1,814 kg of bombs, and an internal rotating bomb bay with a capacity of up to 5,443 kg, with provisions to carry combinations of four Matra rocket pods with eighteen SNEB 68 mm unguided air-to-ground rockets. It is also armed with either two AIM-9 Sidewinders for self-defense, two AS-37 Martel missiles, or four Sea Eagle missiles. Various bombs were included such as unguided bombs, laser-guided bombs, and the Red Beard or WE.117 tactical nuclear bombs. Other armaments were AN/ALQ-101 ECM protection pod, AN/AVQ-23 Pave Spike laser designator pod, buddy refueling pack, or drop tanks for extended range/loitering time. The aircraft also featured the Blue Parrot ASV search/attack radar avionics system.